We’re Fightin’ Irish Wherever We Are In The World 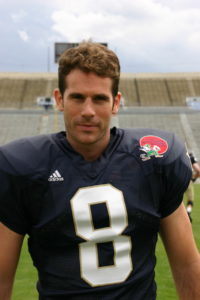 When you’ve spent the past 22 years traveling the world taking student-athletes, coaches, administrators, alumni, family and friends on the adventure of a lifetime, you’re bound to bump into someone you know somewhere along the line. It’s a small world, after all.

Global Football founder and president Patrick Steenberge’s close ties with the University of Notre Dame means there are plenty of Fighting Irish alumni out there whose paths we cross from time to time, the latest being former linebacker Anthony Brannan.

Now based in Los Angeles, Brannan works in the film and entertainment industry, in roles varying from production to screen-writing and acting. He and Patrick reconnected by chance on the sideline before the Irish played Navy in San Diego earlier this season. They had first met when Global Football organized the Notre Dame Japan Bowl, which pitched a team of former Irish players against the Japanese national team in Tokyo in 2009.

“I’d heard about it before and there was another game that some teammates had played in Europe a few years earlier,” explained Brannan. “I had no idea what I was getting into. At the tryout they held, there were 100 guys and they were going to cut it down to 50 spots. It was like going back in time to when you’re facing cuts.”

Brannan made the roster and was on the plane to Japan. The game, played in the Tokyo Dome, and the prior week of practice and sightseeing, gave the linebacker a chance to play once again for the legendary coach who had orchestrated the first of his seasons Notre Dame from 1996 to 2000.

“Lou Holtz was exactly the same and he approached things in the same professional way he did every game,” said Brannan. “That first team meeting he said ‘make no mistake about it. We’re here to win.’ It was so refreshing to be a part of that as well. It makes you remember what it was like 20 years earlier when you experience it again. All his lessons from every day and his nuggets of wisdom are applicable to your life, family and relationships.

“It was funny to see guys in their twenties, thirties and forties taking a knee and looking at him with complete attention. He still commands the same amount of respect.”

Brannan also caught up with old teammates in Japan, such as Bobby Howard, Tim O’Neill, Kurt Belisle, Melvin Dansby and Ivory Covington, while playing alongside Notre Dame stars he had admired.

“Tony Rice was the Notre Dame quarterback when I was a kid, and all of a sudden I’m on the field defending against him in practice,” he said. “Being back on the field with many teammates, which you thought would always be only a memory, was a very surreal experience, but one that I really cherished.”

When his playing career was over – for a second time – Brannan tried his hand at acting and immersed himself in the career opportunities available within the industry in Los Angeles, again connecting with a former Notre Dame player.

He explains: “I came out to Hollywood as an actor and purposely went out for every football role I could. I was in a NCAA advert with Jeremy Akers, which was a lot of fun.

“I got into other areas of film, like writing and producing and haven’t acted in a while. I have produced films and am starting to do more in that area. I just produced Unplanned, a film that’s going to come out in the spring. And I’m doing a lot more production for sports.”

Production for sports is key to the ongoing storytelling at Global Football, so perhaps that connection between Brannan and Steenberge will happen again somewhere down the road.