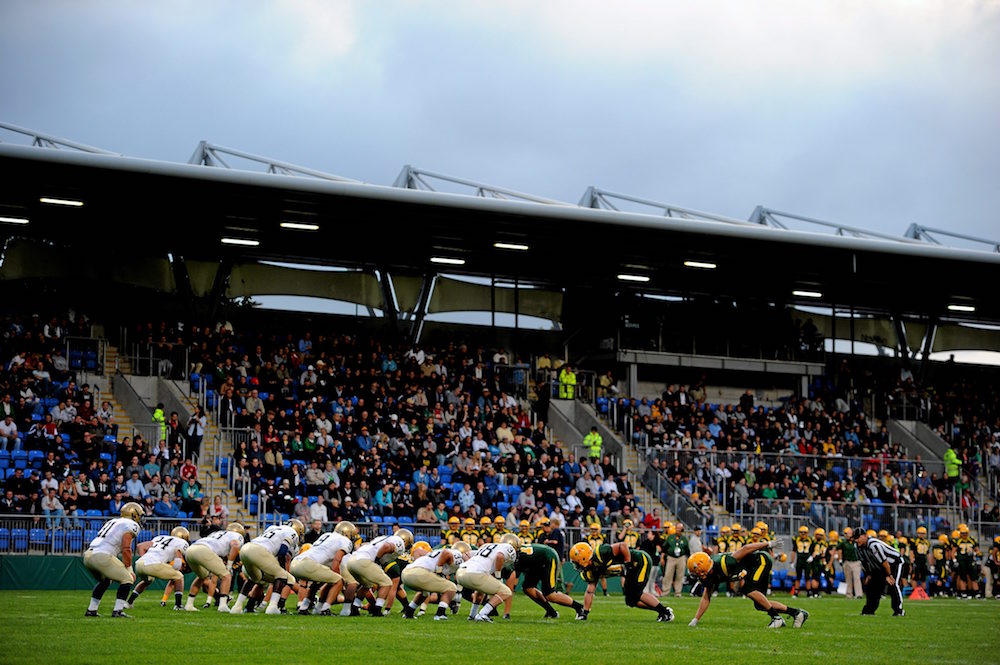 Global Football will celebrate 25 years as the world leader in providing student-athletes the opportunity to travel and compete internationally with similar people of differing cultures when seven colleges and universities, with eight teams venture to Europe in the spring of 2020.

Since 1996 Global Football has taken more than 15,000 amateur athletes, coaches, families and fans from in excess of 370 schools to 28 countries on 6 continents, with the annual spring tours being a regular highlight on the travel calendar.

The intrepid travelers of 2020 will take in Edinburgh, Glasgow, Athens, Rome, the Swiss Alps, Paris, Normandy, Naples, Pompeii, Sorrento and the Scottish Highlands between April and July as six college football teams and two soccer squads head across the Atlantic.

“When we began this Global Football adventure 25 years ago, I could only imagine how many visionary coaches we would work with, who would provide such life-enhancing experiences for their student athletes,” said founder and president Patrick Steenberge. “2020 will be another very special travel season as many long-time client schools will join us again, along with new partner Alma College. Also, we will expand our soccer offerings to include our first men’s travel soccer team, from Siena Heights. I am fired up to personally join as many of these teams as possible, and to work closely with each coaching staff to guarantee tours that match their dreams.”

Alma College is a first time traveler and the appropriately named Scots will kick off the spring tours with a visit to Scotland from April 20-28, which will include a competitive game against the East Kilbride Pirates, who annually compete against Division III teams traveling with Global Football. The Scots will take in Bannockburn, Fort William, the Scottish Highlands, the Isle of Skye and Loch Ness, before touring Edinburgh and Glasgow.

Claremont-Mudd-Scripps heads overseas with Global Football for a fourth time, taking in new destinations in Athens and Rome. The Claremont-Mudd-Scripps team will spend three days exploring Athens, including a private boat excursion on the Athens Riviera, before flying to Naples and visiting Pompeii, Rome and the Vatican and playing a game against an Italian club team. In previous years the Stags have visited Ireland and Scotland (2017), the Czech Republic and Austria (2014) and Ireland (2007).

The second of three tours taking place during that May 18-26 time sees Southwestern University visit Scotland where they will play against the East Kilbride Pirates. The Southwestern Pirates, who have traveled previously to Italy (2017) and Germany (2014), will take in Bannockburn, Fort William, the Scottish Highlands, the Isle of Skye and Loch Ness, before touring Edinburgh and Glasgow. Coach Joe Austin has continued to allow these unique opportunities for his student athletes, as he also did at Hanover College prior to heading to Southwestern in Texas.

John Carroll University will head overseas for the ninth time with Global Football when they venture to Italy from May 18 to 26, making the most of the NCAA rule that allows Division III football programs to travel every three years. The Blue Streaks first visited Spain in 1997 and have since returned to Europe multiple times under four head coaches, also taking in Italy, Ireland, Switzerland and France. On the agenda for John Carroll in 2020 are the Naples and Sorrento coast, the buried city of Pompeii, Mount Vesuvius, ancient Rome and The Vatican, before a game against a local Italian club team.

One of the top NAIA college teams annually, Benedictine College of Kansas, once again will head to Europe under the steady leadership of Coach Larry Wilcox. France is the destination, a favorite spot for Coach Wilcox, who began offering this type of educational experience for his student athletes back in the 1980s. His highly competitive squad will enjoy Paris, Normandy and areas in between during their May 18-26 visit, highlighted by a game against a top French squad.

Rose-Hulman Institute of Technology is another frequent traveler and the Fightin’ Engineers will head to Europe for a sixth time to take in the Swiss Alps before moving on to France where they will visit Paris and Normandy. Rose-Hulman first traveled to England and France with Global Football in 2002 and have since ventured to Italy, the Czech Republic, Spain, Switzerland and Austria. This spring they will enjoy the sights of Paris, a Seine River cruise, the Omaha beaches and American cemetery at Normandy, and a Swiss Alps hike, while facing a French team on the gridiron on June 6, honoring the 76th anniversary of D-Day.

College soccer teams have taken advantage of Global Football tours in recent years, with Siena Heights University from Michigan leading the way. The Saints women’s soccer team will travel to Europe for a fourth time, returning to Italy from June 27 to July 6. For the first time, the Siena Heights men’s team will also travel overseas, taking in Sorrento, Rome and Athens, with both teams playing matches against local soccer clubs.

Family, friends and alumni wishing to travel with teams heading overseas can find booking details at the web page https://www.globalfootballtours.com/.