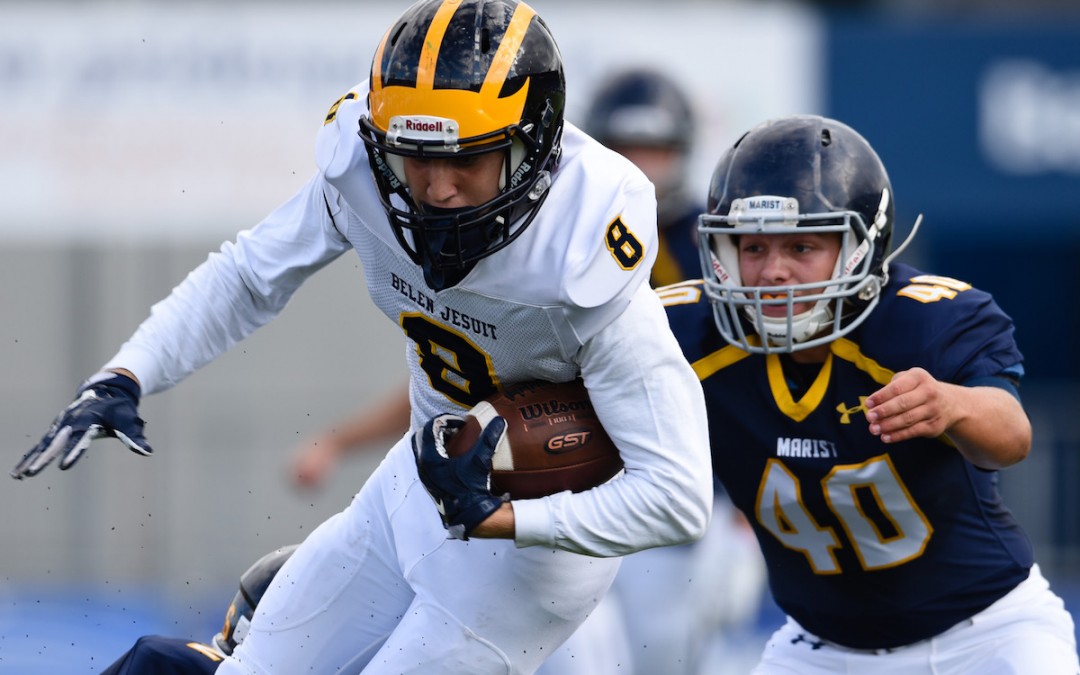 Drew Geeslin came up with two interceptions, Jack Dinges threw for a pair of touchdowns and kicker Timmy Bleekrode split the uprights from 47 and 37 yards as Marist School shut out Belen Jesuit 27-0 at Donnybrook Stadium in Dublin.

“I thought after halftime we did a good job of stopping them and getting them off the field,” said Marist coach Alan Chadwick, whose team led 7-0 at the break. “They had too many possessions in the first half, but when we got settled down we stopped them from being able to convert third downs and that was the difference. We just didn’t have the ball enough in the first half. We only had two possessions really and one was down on the three-yard line.”

Belen Jesuit started promisingly as rushes from Javier Hernandez and Pedro Garcia and two Lucas Pola to Diego Ortega passes moved the Wolverines efficiently into Marist territory on the opening drive. But a lofted pass towards the end zone was intercepted Geeslin, who wrestled the ball free from the hands of Ortega.

The Belen Jesuit predominantly run based wing-t offense, mixed with the occasional spectacular pass attempt downfield, stalled, but took time off the clock, leaving the game scoreless midway through the second quarter. A bruising Kyle Hamilton run and a penalty moved the chains to the Belen 33-yard mark where Marist broke the deadlock.

Quarterback Dinges hit Dean Johnson, who cut inside a defender to weave his way into the end zone for a 7-0 lead with 5:29 to play after Bleekrode tagged on the extra point.

Belen Jesuit ended the half as they had begun the game, with a promising drive halted by an interception. Garcia connected on a 12-yard pass to Ortega and Don Chaney Jr rushed to the outside to the Marist 38, but there was a sense of déjà vu as Geeslin again beat intended target Ortega to the ball and the Georgia team protected its slim 7-0 lead at halftime.

“When you play a team like this that is so good at ball control, you can’t turn the ball over and it wasn’t really demoralizing, but it put us in a bad position,” said Belen coach Richard Stuart. “You can’t do that when an opponent has such a powerful offense.”

Marist stretched its lead to 10 points with a 37-yard Bleekrode field goal and caught a break that led to seven more points when a high snap flew over the head of Belen punter Javan Rice, who covered up at his own 18-yard mark. One play later, Dinges lofted a pass to the corner of the end zone where John Fitzpatrick reeled in the touchdown and Bleekrode’s kick made it 17-0.

“I think they key plays that really sparked us were John Fitzpatrick’s touchdown pass and the snap over the head when they turned over the ball,” added coach Chadwick.

A Dinges run around the right end took the ball to the one-yard mark and from there Michael Addicks punched in a touchdown for an unassailable 24-0 lead as the third quarter came to a close.

As the Wolverines pressed to put points on the board, Thomas Snipes came up with a sack and forced fumble, which was recovered by David Sharkey as the defense continued to hold firm.