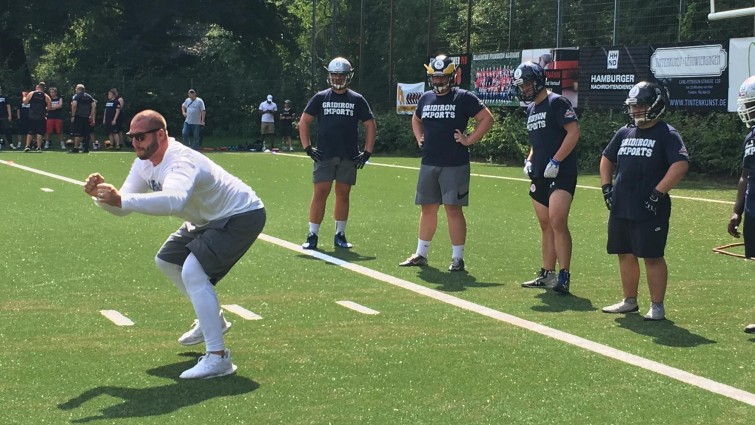 This story by Heiko Oldoerp was published by Deutschlandfunk and is translated here into English.

‘How To Recruit German Offspring For North America‘

Playing in the NFL is the dream of many young footballers in Germany. Björn Werner made it once. Today the former professional ensures that the offspring gets the same chance – with training camps in several German cities.

It’s going to be hot on a football field in the Hamburger Stadtpark – and literally. Around a dozen coaches and almost 80 American football players aged 13 to 19 give everything despite 34 degrees of heat.

Between all the instructions of the US coaches is also repeatedly a German voice heard.

“Eh, come back again. Eh, wait a minute. Running backs-again, both of you.”

Björn Werner wants to serve as a model and mentor

It’s that of Björn Werner. When the Berliner speaks, the young players listen eagerly and look very closely.

“Do you see that? You don’t want to get on with your hands. They just come from the bottom up. On your fingers. Tiptoe. Your leg a little further in, shoulder-wide. Let’s go. Go.”

Werner finally managed what they dream of – a career in the National Football League, NFL. He played for the Indianapolis Colts for three years and now wants to pave the way for young German players to go down the path he once had.

“So, the goal is really, we want to find people who are hungry, who are good enough, who are the whole package and go to America.”

With coaches from American high schools, Werner is currently touring Germany, offering training camps and thus giving young players the chance to show and recommend themselves.

“I am one of the few Germans who have made it. We’re all about being role model, mentor. I can give the boys much more – in German language and not only in English – that they understand it too. And that’s my goal. I’ve always been looking forward to starting this program. I knew that while I was still playing, I’d do something like that sometime.”

The NFL is the dream of the next generation

Werner himself once went from Berlin to an American high school. It followed the way to college – the springboard to the NFL. This is also the dream of the 16-year-old Malte from Quickborn-and the one-year older Lennard from Cuxhaven.

“Yes, it’s impressive when you see where he came from, what he has achieved. That’s what everyone wants to do of us, everyone who’s here. ”

“There is of course always a hundred percent here, because this competition is simply much bigger – even against your own teammates. Of course, you have to prove yourself, you have to show the coaches that you want it – and that you are better than everyone else here. Because otherwise it will be nothing. And then you also have to be clear at 34 degrees times without water.”

The road to the USA is not only sweat-driving but also rocky and heavy but it is quite possible. In the last two years Björn Werner and his team have brought 65 young players to America. 15 of them play in the highest college football league-the springboard to the NFL.