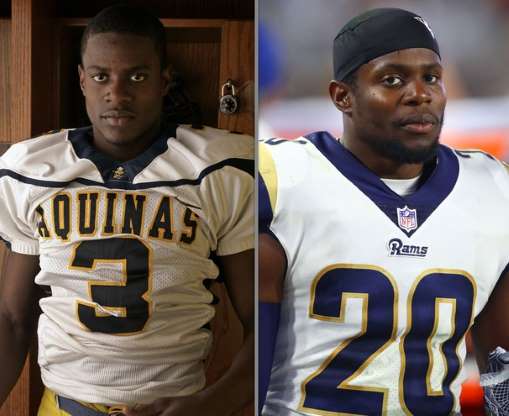 Sunday’s Super Bowl LIII between the New England Patriots and Los Angeles Rams will feature eighteen players who were once standout performers at Catholic high schools across the nation, including eight from programs ranked during 2018 in the Catholic Athletes for Christ Top 25.

St. Thomas Aquinas (Fort Lauderdale, Fla.), who were positioned at number 9 in the final CAC Top 25 ranking, boast three alumni who all expect to see significant action at the Mercedes-Benz Stadium. Running back James White and wide receiver Philip Dorsett will line up for the Patriots, while starting in opposition on the other side of the ball will be former high school teammate Lamarcus Joyner at free safety.

“Me and James White played running back together and Philip Dorsett was a junior at that time,” explained Joyner, speaking during the Super Bowl Opening Night event as 2,000 media descended on players and coaches of both teams with an array of questions. “We’ve kind of drifted apart over the years. Everyone has gone their own separate ways, but I still have love for those guys and it’s going to be great to reunite with old high school teammates and play against each other for bragging rights and for the Super Bowl. We cross paths when we go back to St. Thomas and it’s just great to represent that great program and play to the best of our abilities.”

Joyner will play in his first Super Bowl after five seasons with the Rams, who selected him in the second round (41st overall) of the 2014 NFL Draft. He has recorded 260 career tackles (191 solo) with 4 sacks and has snared three career interceptions.

“We’re treating this as a business trip, and we know what we’ve come to do and I’m taking everything one day at a time up to Sunday,” he said. “We have great leadership in coach McVay and he motivates us to be the best. We have belief. It’s the way we’re wired.”

Joyner played his senior high school year for the St. Thomas Aquinas Raiders under coach George Smith, where he was a shut-down cornerback as opponents stayed away from his side of the field. He also starred on special teams, averaging 39.6 yards per return including three kickoffs returned for touchdowns. Offensively, he recorded 1,090 all-purpose yards on just 79 touches, scoring four rushing and four receiving touchdowns. Named the National Defensive Player of the Year by USA Today, he was ranked as the best cornerback prospect in his class before committing to play at Florida State.

Standing in Joyner’s way on Sunday, in addition to former teammates White and Dorsett, is a quarterback hoping to lead the Patriots to a sixth Super Bowl win – the incomparable Tom Brady.

“He’s one of the great all-time quarterbacks that you face, like Drew Brees and Aaron Rodgers,” Joyner added. “We were fortunate enough to face them this year, so you remember that you’ve faced a guy like this before and that keeps you relaxed and confident.”

Regardless of the outcome of Sunday’s game, whether it’s Joyner or White and Dorsett, at least one former Raider will leave Atlanta with a Super Bowl ring.

The Catholic Athletes for Christ Top 25 High School Football Rankings, presented by Siena Heights University and Global Football are released on Wednesdays throughout the high school season.  Criteria include the quality of the team and its players, strength of schedule, tradition, and quality of the team’s league, conference, region or district.  The rankings are compiled by Christopher Lawlor, an award-winning writer, who is a voting committee member and advisor for several major national high school events. All Catholic high schools from the United States that feature only four-year players on 11-man teams are eligible for consideration.