China Will Be The 28th Country To Welcome Global Football 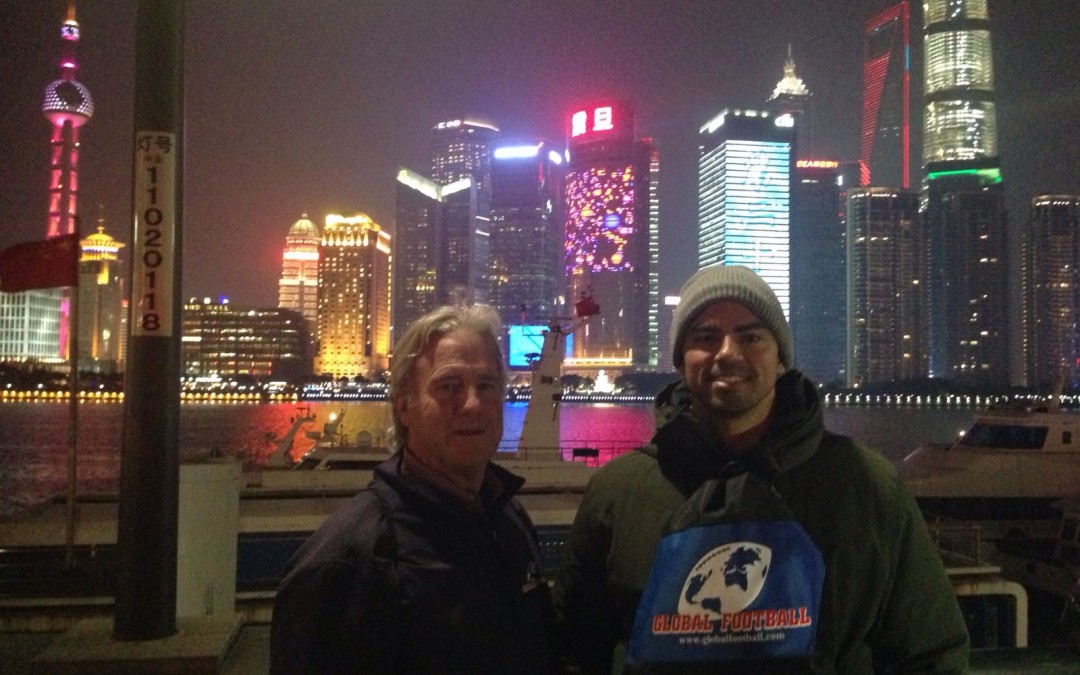 Global Football will venture to China for the first time when Team Stars & Stripes travels to Beijing and Shanghai to participate in the 2017 Global Ambassadors Bowl China from April 1-9.

China will become the 28th country to welcome Global Football travelers when hosting the ninth Global Ambassadors Bowl. The annual event provides the opportunity of a lifetime for deserving student-athletes to travel internationally, while playing the sport of American football and representing their school, state, nation and themselves. The squad of high school senior standouts is selected as much for a player’s conduct off the field as for his performances on the gridiron and is known as Team Stars & Stripes.

“During the past two decades, I have been able to work with dedicated coaches and inspired student athletes as we travel, learn through experience and compete in far-off lands,” said Global Football Founder & President Patrick Steenberge, upon returning from a planning visit to Beijing and Shanghai. “Holding an event in China has always been a dream of mine, and I am thrilled to organize a unique American football tour visiting two of its most notable cities, and exposing our team to the wonders and peoples of China.

Chris Adamson of Viewpoint School in California will serve as head coach for Team Stars & Stripes, who will experience spectacular cultural sites including the Great Wall, the Forbidden City, Tiananmen Square, the Beijing Olympics Complex, and a Shanghai River tour. The traveling roster will be announced before departure for China.

“During my career I have seen firsthand how skilled and passionate football players and fans outside the United States are about the game,” said Coach Adamson.  “The reality is that China presents one of the relatively new frontiers for American football.  In a short period of time the game has taken off at every level and is rapidly gaining momentum.  The chance to lead a team of American High School All Star players and coaches into China to showcase the game of football and bridge cultural differences along the way is truly once in a lifetime.  We are excited to do what we can to help the game of football continue to grow and flourish in China and we are even more excited to represent the United States of America in this game.”

Team Stars & Stripes will face a team from the American Football Academy (AFA) at Yuanshen Stadium in the Pudong district of Shanghai. The American players and coaches will host an American football clinic in both Beijing and Shanghai for local Chinese players discovering a sport growing in popularity in China.

Bill Gallagher played in the same backfield as Patrick Steenberge at Notre Dame and has taken charge of Team Stars & Stripes for the past four journeys overseas, visiting France, Germany, Italy, Ireland and Spain.

Jerry Ralph was the offensive coordinator for Team USA, which won the Global Football-organized NFL Global Junior Championship during the week of Super Bowl in San Diego in 2003, featuring the Under 19 national teams of USA, Canada, Japan, Mexico and Europe.

John Storey has been a member of the Team Stars & Stripes squad’s coaching staff for all eight years on visits to Japan and Europe. He first traveled with Global Football in 1997 as the offensive line coach with John Carroll University, and most recently as a coach for the NCAA D-III select team at the Tazon de Estrellas in Mexico.

Having held a combine and individual tryouts for local players, China’s American Football Academy (AFA) has recruited local Shanghainese and expatriot players to represent China in the Global Ambassadors Bowl. The AFA was founded in 2016 and provides education and professional football training, promoting the core values of football players: leadership, teamwork, discipline, integrity, and endurance.

“We are extremely pleased to provide the opportunity for youth in and around Shanghai to compete and match-up against a team from the United States,” said Chris McLaurin, founder of the AFA and the team’s defensive coordinator. “For me, this has been a long time goal to see our teams compete at a U.S. standard, and our coaches and managers will be doing everything we can possibly do to prepare. This game also shows how the game of football can serve as a powerful touchpoint between the United States and China as the game continues to grow in China, a positive form of people-to-people diplomacy.”