Chris Creighton, The Dreamer Who Inspired The Kili Bowl 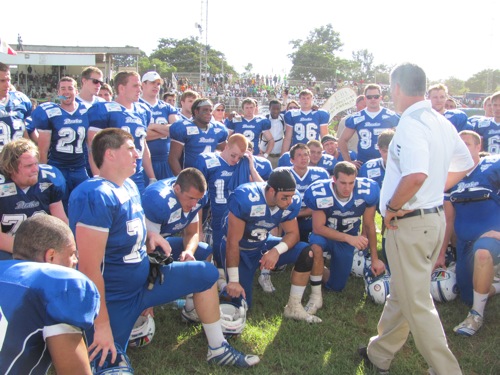 Chris Creighton made history last weekend. Back in 2011, it was a similar story, only on a different continent.

As the second-year head football coach of Eastern Michigan University, Creighton guided the Eagles to a first non-conference road game win in 27 years on September 12 with an historic 48-29 victory over Wyoming.

Four years ago, while guiding the fortunes of the Drake University Bulldogs, the visionary coach created a unique piece of history as his dream of playing the first game of college American football on the African continent became a reality.

Chris Creighton is one of the sport’s true personalities whose careers have crossed paths with and inspired Global Football during the past 20 years of organizing and producing games and events in 23 countries on 6 continents. Each week, we take a look back at the past and present endeavors of those Global Football alumni.

Creighton’s dream of not only playing the game he loves in Africa, but also exposing his players and staff to a meaningful cultural and educational visit of service and friendship, was shared back in 2010 at the AFCA Convention. His literal dream was outlined to Global Football President Patrick Steenberge and just for good measure included a plan to scale to summit of Mount Kilimanjaro, Africa’s highest point.

“I first worked with Chris when he was coaching at Wabash, a top NCAA Division III college,” said Steenberge. “We went first to Switzerland and Austria, then three years later to Panama, which fit his personal goals of ‘impacting young men’.

“From the beginning I knew he was a unique coach, a proud Christian man of passion and purpose. Just as he motivated his players, he drove me to seek out new goals, and his idea that turned into the 2011 Global Kilimanjaro Bowl was a milestone in my life.”

Eighteen months after the idea was hatched, the football teams of Drake University and the CONADEIP All-Stars from Mexico stood captivated by the sun rising over a magnificent landscape from the most spectacular of vantage points. They had played that football game too, and had impacted the lives of thousands of Tanzanians.

The full story of how Creighton’s dream came to fruition is captured in Steenberge’s book Tupande Kileleni, a first hand recollection of the Global Kilimanjaro Bowl.

For the record, Drake emerged as winners over their Mexican opponents, but the score of the game, played before a crowd of 12,000 curious locals enjoying their first-ever game of American football, was irrelevant. What mattered was the experience that touched so many lives and inspired all who participated.

The Bulldogs returned to Des Moines, Iowa, and the fruits of the bonding that had galvanized the team in Africa were evident as, under Creighton’s leadership, Drake won a share of the Pioneer Football League title. Arguably more meaningful was the NCAS Giants Steps Award that honored the university for its outreach in Africa.

Having posted a 45-22 record at Drake, Creighton moved on to Eastern Michigan in 2014, enduring a frustrating 2-10 season. The 2015 campaign opened with a loss, but the now 1-1 Eagles host Ball State at 3pm on Saturday in the first Mid-American Conference matchup of the season.

Steenberge added: “It was no surprise that Chris would move up to an FBS team that has not had much on-field success in recent decades. Chris is so powerful, so focused and so real that his student athletes follow him with an uncommon devotion. Look for Eastern Michigan to rise up solidly in the MAC.”