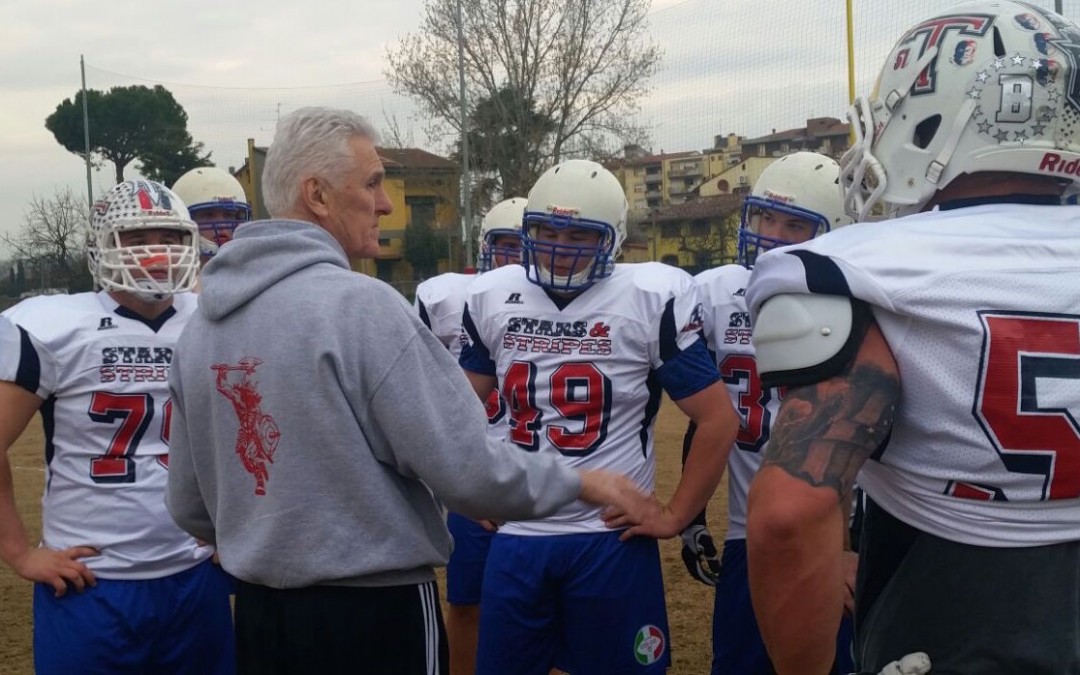 Coaching American football in Asia will be nothing new to Team Stars & Stripes offensive and defensive line coach John Storey when he arrives in China this week for the Global Ambassadors Bowl.

The veteran coach from Villa Angela St Joseph in Cleveland, Ohio, is the only member of the coaching staff to have participated in every Global Bowl since the inaugural event in 2008, when a select team of high school student-athletes ventured to Japan.

Storey has become a fixture on the team’s travels, adding visits to France, Belgium, Germany, Italy and Spain to that first of two consecutive bowl games in Tokyo. Yet the thrill of traveling overseas with eager young minds and the chance to spread the appeal of the gridiron never grows old. And China is another destination that Storey and his wife Linda, who will join him on another adventure, just as she did to Japan almost ten years ago, are eager to discover.

“I just think the educational part of it and the history part is going to be incredible,” said Storey. “I look at it as a wonderful opportunity. The trips we’ve been able to go on have been real eye openers and have been nothing but positive. Some of the kids we took to Japan all those years ago are still in contact with the families they stayed with. That sums up what this team is about: making lasting impressions and friendships.”

Storey is a natural teacher of the game and is keen to ensure that student and athletes whether touched by the experience firsthand in China, or back home in Ohio, get to experience all that is positive of the visit.

“This is a great opportunity for us to help impact the sport there and help the Chinese players improve their game by holding some clinics,” he explained. “That type of interaction is irreplaceable, whether you’re one of the American kids passing on knowledge, or one of the Chinese kids discovering something new.

“I’ve arrange for the communications lady at our school to share our experience with all the students, who will be able to see the photos we send back on 60-inch flat screens in the main lobby of our school entrance. It’s important that students see that there’s a world out there that is open to them.”

Storey shares his travel experiences personally by recruiting a handful of local football players from Cleveland area high schools to join Team Stars & Stripes every year. He remains in touch with many, including those who accompanied him to Japan, who have since graduated from college and are making their way in the world. This year’s three Ohio-based players are typical of the ambassadors Storey seeks out to represent their school, their nation and themselves overseas.

Storey explained of his recruits, three of whom come from VASJ: “Matt Villegas is a senior who is a defensive tackle and he was the first one to sign up and is a wonderful kid. Nicky Follett is an offensive lineman who can also play defense and is a wrestler. He’s a second cousin of mine, related from Canada. Dan McGarry is a wide receiver and defensive back who was just part of the state championship basketball team in Ohio. He was the heart and soul of the football and basketball teams. We also have Jonathan Abrams from Gilmour Academy, who is an outstanding running back and linebacker.”

Finally, when it comes to being in China, Storey will take time out from ensuring others are enjoying the experience by allowing himself one personal indulgence.

“I’m looking forward to taking a photo,” he explained. “One with the Great Wall of China. That will be really special.”