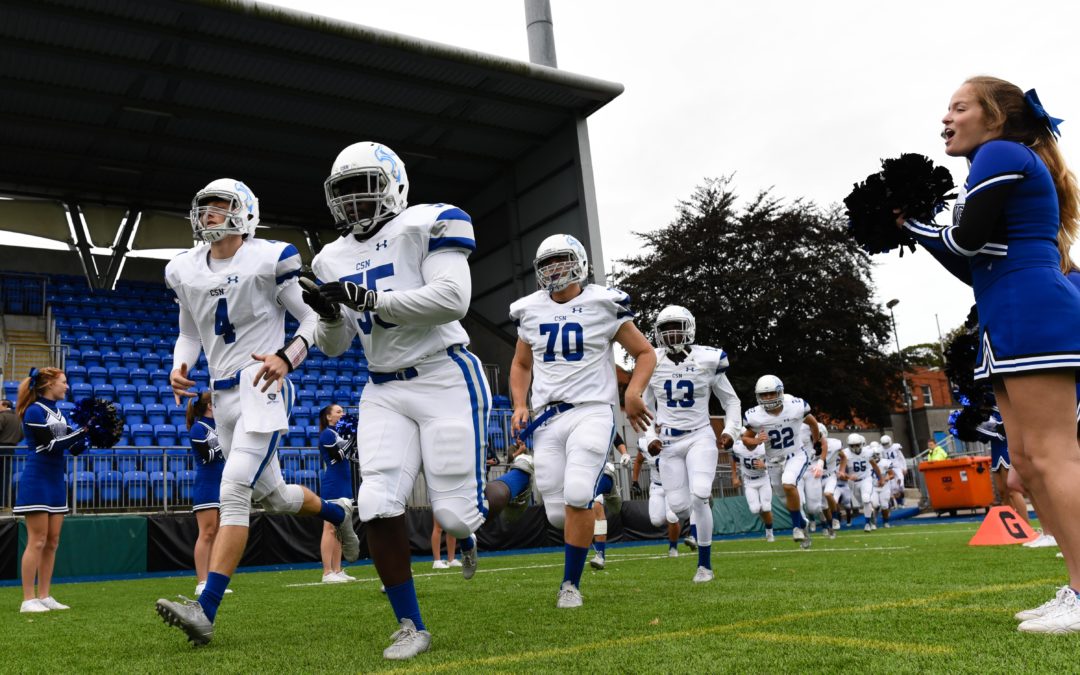 Community School of Naples, from Florida, will return to Ireland in the summer of 2020 where the football team will again compete under Friday night lights in Dublin.

The Seahawks will see action against a fellow American school when Global Football hosts the Dublin High School Football Showcase on Friday, August 28, 2020. Multiple teams from the United States will head across the Atlantic to play competitive and regular season games in the nation’s capital, with the match ups being announced later this month.

The games are played as part of the Aer Lingus College Football Classic and all traveling players, coaches and supporters will attend the game between Navy and Notre Dame at the Aviva Stadium on Saturday, August 29 – the hottest ticket in town. The event will attract more than 35,000 U.S. visitors to Ireland.

“Community School of Naples is excited for the chance to return to Ireland and compete in the Football Showcase,” said Director of Athletic Operations Bart Weiss. “Our initial Global Football experience started in 2016 as we took a then 29-man roster over to Ireland and played a very good team from Atlanta. What a powerful experience for our players, cheerleaders, coaches, faculty and fans.”

CSN took part in the 2016 Dublin High School Football Showcase, playing against Westminster School from Atlanta, and the traveling Seahawks party explored the Irish capital, tried their hand at Gaelic football and hurling, and toured the site of the Battle of the Boyne.

“That opportunity laid the groundwork for CSN to travel abroad with soccer, volleyball and future teams for inspiring leadership ventures,” added Weiss. “This year, CSN football and cheerleading will travel again to learn about local historical landmarks, hone their team-building skills and take part in a truly global experience which is part of our educational DNA at CSN. We honestly feel like this is the type of event that weaves a tapestry of “Educational Excellence” at CSN and offers each student a genuine, world-class learning environment to become responsible global citizens.”

Community School of Naples will train at the impressive athletic facilities of University College Dublin and will experience the local culture through a series of educational tours. Dublin will again be brought to a standstill when all teams and their accompanying bands and cheerleaders join a city center parade on the Thursday night before the games, which will culminate in an American-style Pep Rally in the heart of Dublin City.

“We are excited to add a fourth team that will take part in this great series of games and later this month look forward to announcing match ups that will excite the great sports fans of Dublin,” said Global Football president and founder Patrick Steenberge. “We are always delighted to welcome back schools who have traveled with Global Football, underlining how much they value providing their student-athletes with a memorable experience while broadening their horizons through international travel.”