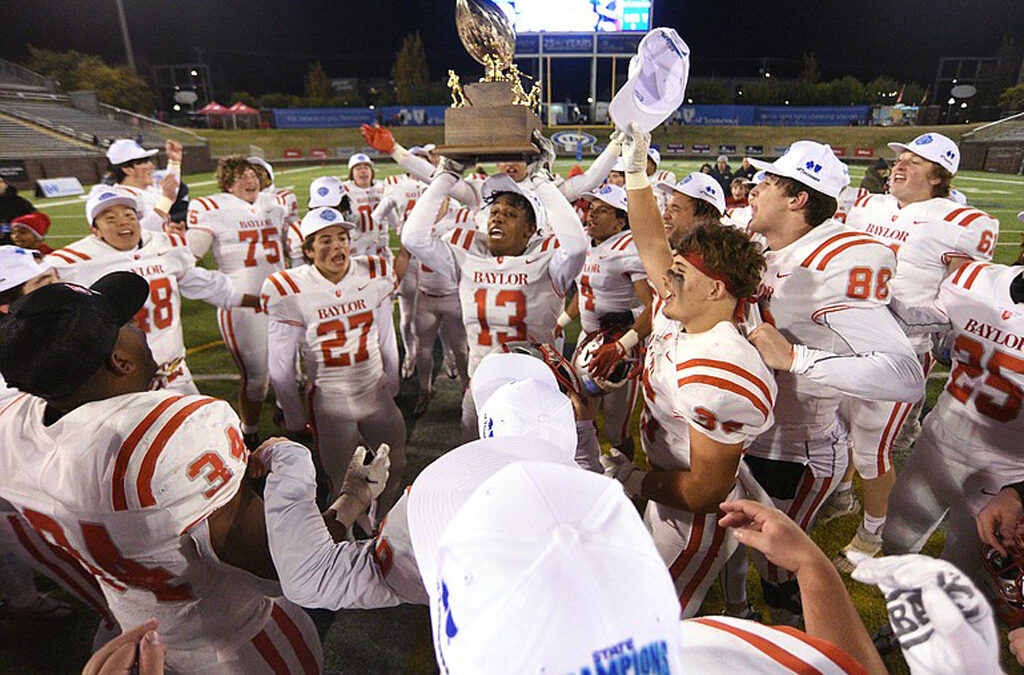 The four illustrious schools represent a relentless commitment to developing scholars to succeed in mind, body, and soul. Building and mentoring student accomplishment means celebrating these individuals in every aspect of their academic endeavors. Committing to GIFT 2023 is a catalyst in achieving those goals.

Partnering with Global Football for a life-alerting student-athlete experience helps unite strong values and traditions within their communities, encouraging scholars to embrace a fearless pursuit to make a difference in the world, no matter where they are.

Baylor rallied from down 21-7 to capture the state’s 2022 Division II-AAA football championship in its first season with head coach Erik Kimrey who transitioned to Chattanooga from the University of South Carolina where he coached tight ends at his alma mater. The title comes nearly a half-century after the program’s first state crown. Baylor has consistently enhanced its venerable tradition since its founding in 1893 and believes the Ireland experience fortifies its reputation for innovation.

Seton Hall returns to the prestigious GIFT after taking part in 2016. The Pirates reached the private semifinals of the 2022 New Jersey State Interscholastic Athletic Association Tournament in the fifth season with Bill Fitzgerald. He had previously served as offensive coordinator/quarterbacks coach at rival St. Peter’s Prep since 2008 and has orchestrated some of the top offenses in New Jersey during that period. Fitzgerald has nurtured a series of Division I quarterbacks including Brandon Wimbush (Notre Dame and Central Florida), Johnathan Lewis (Rutgers), and Massai Maynor (Navy).

Notre Dame Prep helped headline the inaugural GIFT showcase in 2012, defeating Philadelphia’s Father Judge at Park Tailteann Stadium in Navan. The Saints advanced to the 2022 Arizona Interscholastic Association 5A state semifinals, entering the postseason as the no. 1 seed and concluding the sixth season with head coach George Prelock with an impressive 11-2 mark.

Bonner & Prendie rolled to the Pennsylvania Interscholastic Athletic Association 4A state quarterfinals after a string of commanding conference wins over Archbishop Carroll, Cardinal O’Hara, Archbishop Ryan, Neumann-Goretti, and West Catholic. Head coach Jack Muldoon is synonymous with the school’s renowned identity. He is a 1975 graduate and also serves as the associate director of advancement, joining the school in 2016 after a 31-year career with the federal government. Muldoon’s youngest son Brady is a member of the Class of 2025.

The marquee match-maker for GIFT 2023 and beyond is former Notre Dame quarterback Patrick Steenberge, the founder and president of Global Football, a visionary company that arranges for high schools and small colleges around the United States to compete internationally. Global Football has led visits to 28 nations on six continents with more to come.