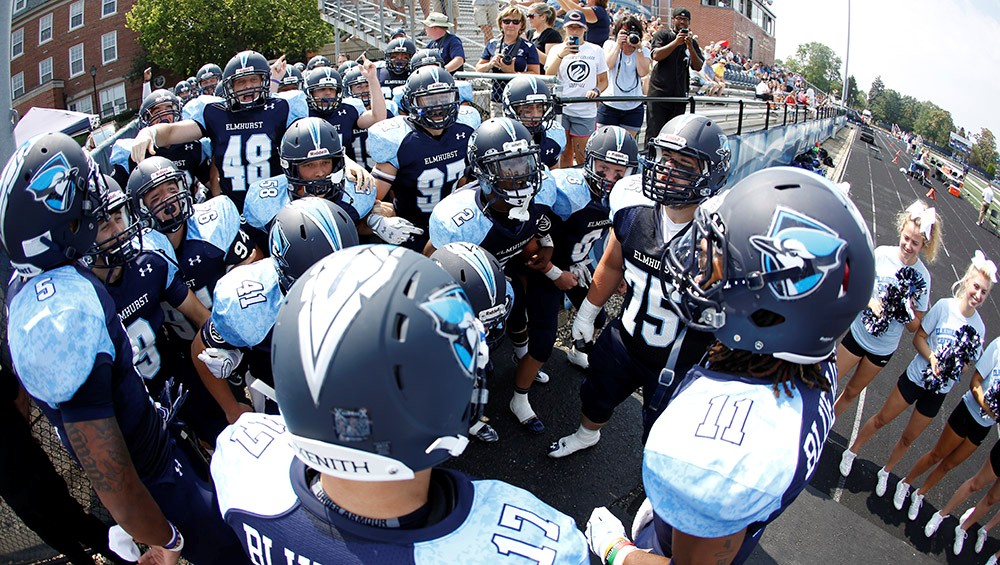 The Elmhurst Bluejays will face one of Europe’s top club teams the Swarco Raiders Tirol in Innsbruck next month as the highlight of a nine-day visit to Austria and Switzerland with Global Football from May 31 to June 8.

The Bluejays, who posted a 4-6 record in 2015, face the defending Austrian champions at 6pm local time / 11am CT on Saturday, June 4 at Tivoli Stadium in Innsbruck. The game will be aired live on a webcast at http://www.raiderstv.at.

In a unique arrangement, the Raiders have partnered with the Oakland Raiders of the NFL since 2008 and both sides share experiences and information on and off the field. The team’s homepages feature articles and game previews and recaps on a regular basis. Every summer The Oakland Raiders invite two to three Austrian coaches to training camp as part of an International Guest Coach Program.

Elmhurst College head coach Ron Planz is no stranger to the Austrian Football League experience having started his coaching career there with the Danube Dragons in 2002.

“I know we are going to have our hands full with the quality of an organization such as the Swarco Raiders,” said Planz. “They are one of the finest run club teams in all of Europe.”

Taking advantage of NCAA rules that allow D-III colleges to travel every three years, the Bluejays traveled to Greece and Italy with Global Football in 2013, Germany and the Czech Republic in 2010 and Italy in 2007. Coach Planz appreciates the value of taking his team overseas during college football’s offseason.

“When we started the process of determining where to travel this summer, we knew we wanted to accomplish three things,” he explained. “First we wanted to go to an area of the world that would provide a unique experience. Switzerland and Austria are somewhat off the main Europe tourist destinations. Their picturesque views, friendly culture and great food will provide that.

“Second, we wanted to play at top notch opponent. Finally we wanted to have fun. I think with the itinerary we have, which includes whitewater rafting in the alps, a tour through the site of a winter Olympics venue and three days in the Austrian capital, Vienna, we are going to have a great time. We can’t wait to for our huge 86-person travel party to take on this once in a lifetime experience.”

Raiders head coach Shuan Fatah said: “This game is a great opportunity for us to compete with a U.S. college, something our players look forward to and would normally not be able to accomplish in their careers.

“It obviously will be a huge challenge for us, and we are great underdogs in this contest. With the game being right in the middle of our season, and us having to play two games on one weekend, it puts some added pressure on our whole organization, but we like challenges and will give it our best effort on the field and off the field. We want to be the best hosts we can be for the Bluejays,
and hope we can make this a great experience for everybody involved.”

Arriving in Switzerland on June 1, the Elmhurst travelers will take a cable car up Mount Pilatus, ride a Panoramic Gondola from Kriens to Fräkmüntegg and take the Aerial Cableway to the Pilatus Kulm summit.

During a strenuous start to the visit, the group will hike to Wengen and take part in a team building white water rafting or canyon activity.

After a Lake Brienz cruise, the group will visit Liechtenstein then move on to Innsbruck via the Bergisel Ski Jump. Stops at historic Salzburg, the game host city of Vienna, a tour of the Schönbrunn Palace and a visit to the Prater Amusement Park will complete the experience of a lifetime.