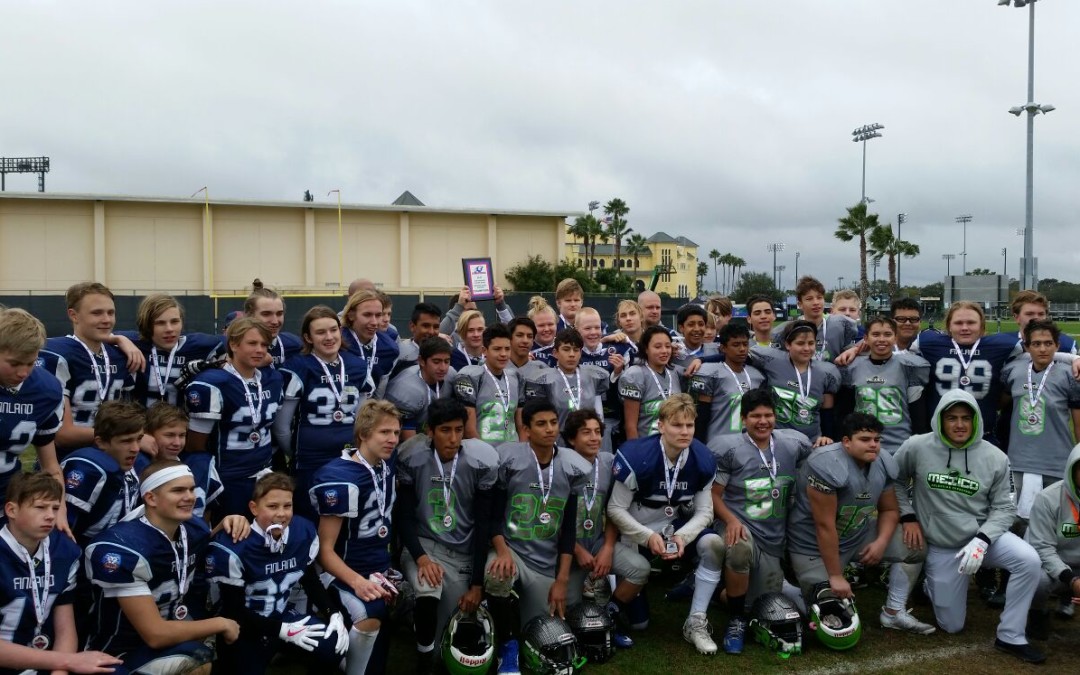 The Finland Blue Lions won the Varsity Division of the Pop Warner International Super Bowl in Orlando, Florida, in only the European team’s second time entering the eight-year-old tournament.  In the Junior Varsity section, Oro y Azul posted wins of 20-7 and 14 7 over Team Mexico to claim the championship at the younger age group.

The Finns and Mexico’s Queretaro were the competition’s only unbeaten Varsity teams going into the weekend’s winner-takes-all final and it was the Blue Lions who emerged as 24-6 victors, to post an overall 3-0 record.

Queretaro finished the event at 2-1, along with Oro y Azul, who claimed their second win in three games with a 20-point shutout of the EAFL Falcons from the UAE, who finished the week’s action with an 0-3 record.  Team Mexico and Panteras tied 14-14 and both finished with a 1-1-1 record.

The youngsters also took part in a Tom Shaw Speed Clinic, attended an evening at Disney’s Animal Kingdom for the annual International Party, and enjoyed all that the Disney facilities have to offer.

“This event just gets better each year, and I know everyone who traveled to Orlando for the world’s largest annual American football tournament will return home with fond memories of Disney and Pop Warner football,” said Global Football President & Founder Patrick Steenberge.  “Thanks to all those coaches and parents who helped organize and support these youngsters.  I have had visitors from many other countries stop by to get a personal look at the event, and expect numerous new teams and countries to join the fun in 2018.”

The popularity of the Global Football-organized International Bowl games at the Pop Warner Super Bowl is highlighted by an official event video featuring game action and interviews with players, coaches and traveling parents: https://youtu.be/gCZqmw0H72w.