A Look Back At The Global Ambassadors Bowl Italy 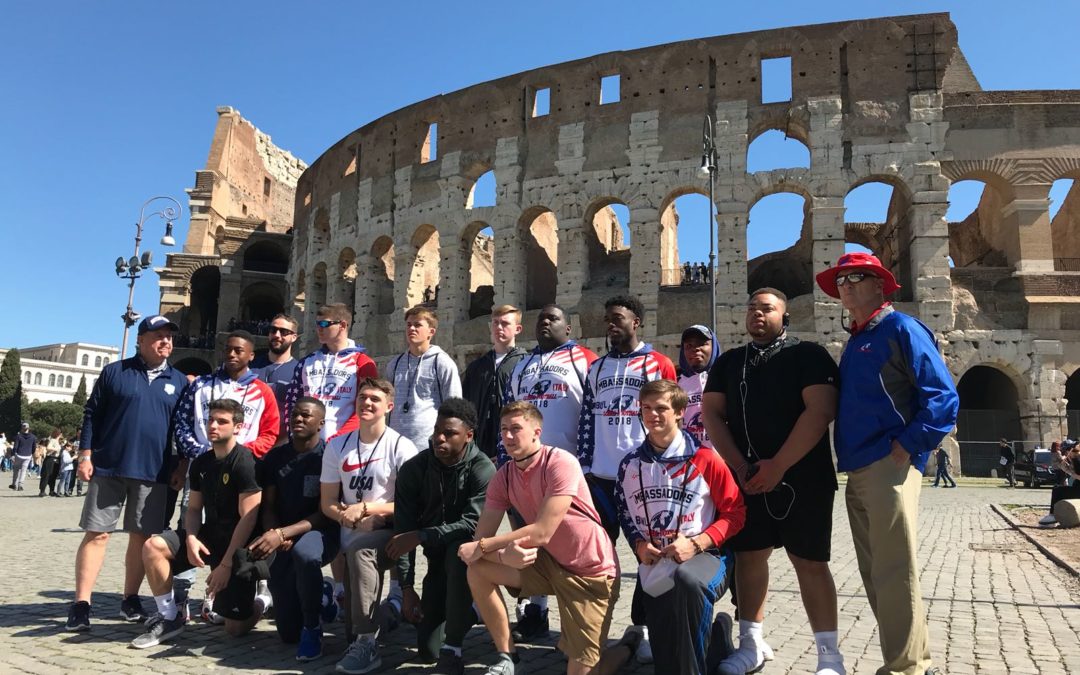 “I’ve always wanted to visit Italy.  I really must travel there some day and take my family.”

At Global Football, we’ve heard such sentiment countless times.  And, while many prospective travelers will never actually venture overseas under their own steam, those who entrust Global Football with enabling them to live that dream create precious memories that will last forever.  As anyone who has traveled abroad knows, these unique memories and life lessons can only be acquired through blending travel and competition, both of which are best experienced by being part of a Team.

From March 31 to April 8, 2018, we took high school student-athletes from five states to Italy to participate in the 11th Global Ambassadors Bowl.  While defeating an all-star team from the Lazio (Rome) region of Italy, part of the Italian American Football Federation, was a highlight, the traveling party will always remember arriving in Rome on Easter Sunday and heading directly to the historic World War II American cemetery of Anzio.  Suddenly this part of our world’s past became very real to each individual.

Over the next eight days they would enjoy an action-packed itinerary: visiting Naples, the ancient ruins of Pompeii, dining on the side of Mt. Vesuvius, staying three nights in the seaside resort of Sorrento, the famous TreviFountain, the Spanish Steps, the Pantheon and Piazza Navona in Rome.  They enjoyed a guided tour of the Coliseum and the ancient Roman Forum, a private Mass in the Irish Chapel of the crypt at St. Peter’s Basilica, a guided tour of the Vatican Museum, the Sistine Chapel and St. Peter’s Basilica.  Yes, we make sure our student athletes, parents and coaches experience everything possible during their stay!

“Experiential Learning involves learning by doing,” says the team’s head coach Bill Gallagher, a long-time coach and educator at William Penn Charter in Philadelphia.  “Global Football gives high school football players from the USA and foreign countries the opportunity to do both.  Our players get to experience the culture, language, food and history of countries they would otherwise only read about.  The players from foreign countries enjoy the opportunity of meeting and competing with American players, learning first-hand how to play our game of what they refer to as American Football.”

Among the 28 countries on 6 continents where Global Football has taken intrepid travelers since 1996, China, Japan, Italy, France, Spain, Austria, Belgium and Germany have welcomed members of the high school-aged Team Stars & Stripes for the Global Ambassadors Bowl.

“It’s a once in a lifetime experience; a perfect blend of culture, community, and athletics,” says Evan Sharpley, a former University of Notre Dame quarterback who is the Team Stars & Stripes offensive coordinator coach, and has visited Italy, Spain and China while serving in that role.  “Global Football tours have a world class reputation that accommodates athletes, families, and adventure seekers.  Want to take the game of football aboard?  Want to broaden your horizons?  Look no further.  Come “live the dream” with Global Football.  You won’t regret it.”

The Italian team, drawn from local clubs Marines Lazio, Roma Grizzlies, Gladiatori Roma, Minatori Cave, Bufali Latina and Legio XIII Ostia, and coached by Bart Iaccarino and his Lazio Ducks staff, trailed 55-0 at halftime, but the annual game is about much more than the final score.  As the FIDAF USA Experience Director Fabrizio Cuppelini commented following the day of football action: “Our boys love this chance to test their skills, to learn from Americans who have so much more experience, and to meet young men who play with the passion we are working to instill in our young athletes.”

Family, alumni and friendsare encouraged to travel to share this once in a lifetime experience with their loved ones and support their son’s team as he represents his country overseas.  The players and coaches also give back to their gracious hosts, undertaking community service projects and helping the development of the sport overseas by conducting American football clinics with their opponents.  The home teams never mind the sometimes-lopsided score line as it offers them a chance to measure their abilities against more challenging opposition than they are used to facing.

“The Global Ambassadors Bowl tours are a festival of adventure, art, architecture, culinary and cultural experiences, while sharing the game of American football with the world,” explains John Storey.  The long-time and highly-respected Cleveland Villa Angela-Saint Joseph High School coach and educator is a veteran of every annual overseas experience.  “Tours are daily lessons of history and language that further the desire for a lifetime of learning and travel.”

And let’s not forget, it is the players, the maturing young men, who are ‘living the dream,’ as we like to say at Global Football, when they travel the world with us.  As their horizons expand they are developing into better Global Citizens, ready to take on future challenges in their own lives.

“My son Rory was privileged to have the experience of a lifetime when he traveled to China in 2017 with Global Football,” said his mother Colleen Foley.  “It was truly an experience he will never forget, meeting players from around the U.S. that he still keeps in touch with, while playing football in China.  Rory still talks about the best trip of his life!