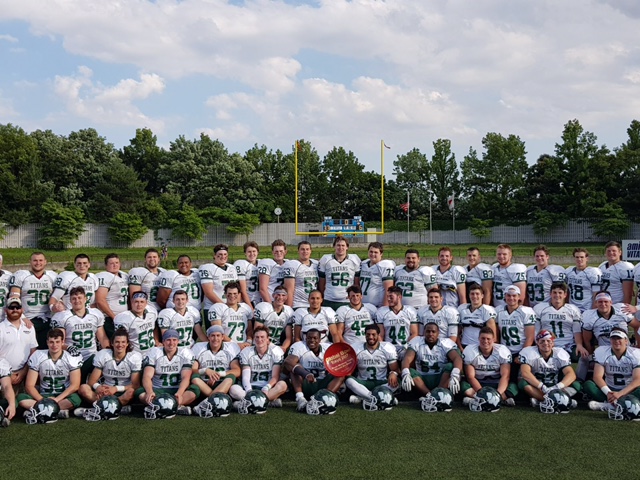 The final two games of this year’s annual Global Football spring tours were played in Germany in Japan at the weekend, closing out a 22nd year of successful overseas American football visits organized by Global Football.

Rose-Hulman Institute of Technology’s Fightin’ Engineers beat the Landsberg X-Press 82-0 in Germany, while Illinois Wesleyan University took on Tokyo’s Waseda Big Bears in Japan, with the Titans emerging as 33-6 winners.

Rose-Hulman faced the X-Press on a perfect hot summer’s day and led 21-0 at the end of the first quarter. Tyler Brutofsky returned a punt return 51 yards to open a seven-point lead, which was added to by Garrett Wright rushing touchdowns of 11 and 4 yards, with, Jae Murray adding all three extra points.

The Fightin’ Engineers scored once in the third quarter on an 18-yard pass from Chris Johannigman to Garrett Wight that was converted by Murray’s PAT. Four fourth quarter touchdowns and another Kirby interception completed the win.

Rose-Hulman has traveled with Global Football on three occasions to England & France 2002, Italy 2008, and the Czech Republic & Austria 2011. Between May 29 and June 6, their visit to Europe has included a Jungfrau Valley hike and Lutschine River activity, Neuschwanstein Castle, and Munich and Vienna sightseeing.

Illinois Wesleyan traveled for a fifth time with Global Football, having been to Italy 2000, France 2005, the Czech Republic & Austria 2009, and Finland & Sweden 2013. The Titans will remain in Japan until June 8, visiting Tokyo’s Ginza District, the Imperial Palace Plaza, the Meiji Shinto Shrine, Yoyogi Park, the Tokyo Dome, Tsukiji Fish Market, the Sumo Wrestling Museum, Mount Fuji and will go on a Tokyo Bay cruise.

“It was a fun ball game, it was a great win,” said coach Eash “Toyko is an amazing city. You are talking about (a country of) 37 million people, I can’t explain it. A lot of people and a lot of buildings and our kids are really taking it in right now.”