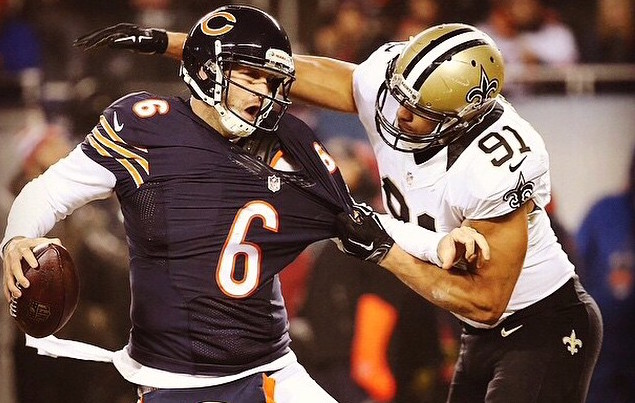 When FOX TV analysts focus on the individual battles expected to be featured during the NFL preseason clash between the New Orleans Saints and Houston Texans on Sunday, the names Kasim Edebali and Bryan Witzmann are unlikely to be highlighted.

But there is a connection between the two second-year players, who could come into contact either when the Texans offense lines up to challenge the Saints defense, or on special teams.

Both Edebali (pictured), a linebacker who saw extensive action in New Orleans in 2014 as an undrafted free agent, and Witzmann, an offensive tackle and camp returnee in Houston hoping to win a roster spot, are both alumni of Global Football initiatives.

Each Thursday, the new look website GlobalFootball.com will celebrate the successes of some of the athletes and coaches who have at some point crossed paths with Global Football during the past twenty years of organizing and producing games and events in 23 countries on six continents.

Hamburg, Germany native Edebali came to the United States in 2007 through the International Student Program, an initiative created and operated by Global Football President Patrick Steenberge that helped talented overseas players secure a place at American prep schools and to further excel on the gridiron. Having starred at Kimball Union Academy in New Hampshire for two years, Edebali made an impression with Boston College, starting all 13 games in 2013, while leading the team in tackles for loss (15), sacks (9.5) and forced fumbles (3).

Last season, Edebali was one of the unlikely success stories in the NFL, bouncing back from the disappointment of not being selected in the 2014 NFL Draft to play in all 16 regular season games, recording 16 tackles, two sacks, a forced fumble and 12 special teams stops. Now, in 2015, he is fighting for a starting spot with the Saints.

Tackle Witzmann first signed with the Houston Texans in 2014, five years after he capped a successful high school career by traveling to Japan as a member of Team Stars & Stripes to play in the 2009 Global Challenge Bowl. He lined up against the Japanese Junior National Team in Kawasaki, near Tokyo and tasted the Japanese culture while living with a host family.

“The core mission of Global Football is to introduce student-athletes to new and exciting cultures, people and experiences, while broadening the appeal of American football around the world,” said Global Football President Patrick Steenberge.

“Kasim came to the United States having been identified by our coaching contacts in Germany as an athlete who could further his football career if given a chance and he has grasped that opportunity.

“Bryan was part of a group of students recognized for their achievements both on and off the field, who were selected to travel to Japan with us, and it is wonderful to see him also striving to play at the highest level.

“All the best to these two Global Football alumni.”

“I had a dream to some day play in the NFL when I came to America through the ISP,” said Edebali. “Now I have a chance to prove that I am good enough.”

Witzmann said: “I have great memories of the visit to Japan. We lived with host families and I have stayed friends on Facebook with mine. It was interesting because the mom didn’t speak any English, the dad was pretty experienced with the language and the daughter was pretty decent with her English too, but the son spoke none. He had a machine that would translate words.”

Edebali wears number 91 for the Saints and Witzmann number 68 for the Texans and while both might duck the radar of the television analysts in terms of a potential meeting on the field, each is aiming to grab the individual spotlight to continue living the NFL dream.