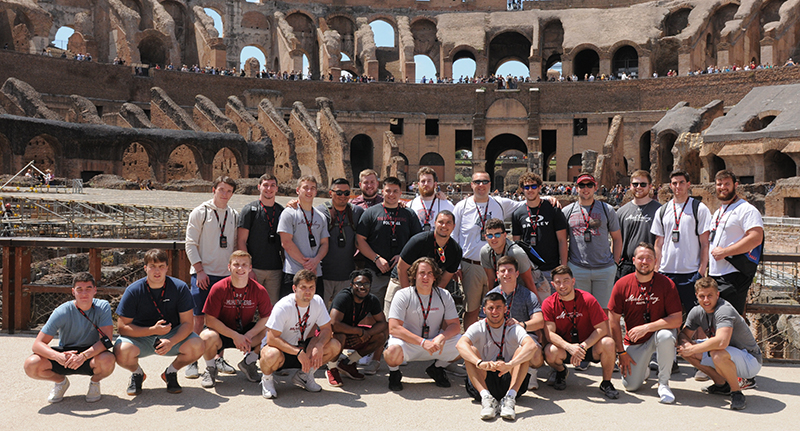 Boasting a perfect 10-0 record in 2019, Muhlenberg College heads into the NCAA Division III football playoffs six months after their season began to take shape thousands of miles away in some of the most picturesque settings Europe has to offer.

The Mules traveled with Global Football to Rome, Florence and Sorrento in May, on one hand to learn from educational tours and enjoy the rich Italian culture, but on the other hand, to give a team that had already shown its potential in 2018 a definite edge when it came to the new campaign.

At the time, head coach Nate Milne said he felt the many intangibles of their Italian tour would help them succeed on and off the field, as they bonded as a group and learned more about their inner workings than they might simply by preparing at home.

This week, as the #5-ranked Mules head into Saturday’s home playoff clash with 7-2 MIT, coach Milne messaged Global Football founder and president Patrick Steenberge to say: “I believe our trip with you and Global Football brought this team even closer together. The offseason started months ago and that trip to Italy was a huge part of our 2019 success.”

The Mules clinched the program’s second undefeated regular season and its first outright Centennial Conference championship since 2008. The Muhlenberg-MIT victor will host the winner of the game between Brockport and Western New England on November 30.

The NCAA Tournament bid is the ninth for Muhlenberg, all since 2002. Last season, the Mules defeated Delaware Valley and Randolph-Macon to reach the NCAA quarterfinals for the first time. While overseas in May, they scored on all three possessions of a scrimmage with Guelfi Firenze in Florence, winning 21-0.

Ranked #25, Central College won the Heartland Conference with a 9-1 mark and face UW-Oshkosh this weekend. The Dutch most recently visited Austria and Switzerland in 2018 and are one of Global Football’s most frequent travelers, having ventured overseas five times, first with legendary coach Ron Schipper whose successor Jeff McMartin, also an AFCA board member, has happily followed. Former defensive coordinator Don DeWaard served for several years as head coach for Global Football’s Team Stars & Stripes at the Tazon de Estrellas Division III all-star game played annually in Mexico. Central’s Director of Athletic Training Programs John Roslien was the director of football operations for the Tazon de Estrellas and before that the Aztec Bowl, a total of 20 times.

North Central College also traveled across the Atlantic in the spring where they faced Czech powerhouse the Prague Black Panthers on June 16, in the fifth such Global Football tour for the Cardinals.

Head coach Jeff Thorne’s father and longtime North Central coach John began the trend with Jeff continuing to take the Cardinals overseas. In June, after the Black Panthers had opened up a 10- lead, the Cardinals ran out 32-16 winners.

This season, the carryover has been an impressive 9-1 record that sets up this Saturday’s playoff game for the #6-ranked Cardinals at home to another regular traveler with Global Football, 7-3 Wabash College. The NCC offense is ranked 1st in all NCAA, coordinated by Brad Spencer, who also coordinates their overseas tours.

In 2016, the Wabash Little Giants headed to Spain to face a Barcelona all-star team, while in 2013, Panama was the destination where Wabash beat a Panamanian All-Star team 56-6 at the Estadio Luis Ernesto Cascarita Tapia in front of 1,200 excited spectators. Wabash also visited Panama in 2003 when coached by Chris Creighton, the current Eastern Michigan University leader, who also took his Drake Bulldogs to Tanzania, Africa in 2011.

The winners of the North Central-Wabash match up will face either 9-1 Hanover College or #1 seed 10-0 Mount Union in the second round. Hanover last traveled with Global Football in 2015 when they explored Ireland and then Scotland and then took on Glasgow-based UK team the East Kilbride Pirates, winning 51-0.

John Carroll University will head overseas for the ninth time with Global Football when they venture to Italy in 2020 but missed out on a NCAA postseason at-large berth despite losing only to #1 seed Mount Union while posting a 9-1 record.

Making the most of the NCAA rule that allows Division III football programs to travel every three years, the Blue Streaks first visited Spain in 1997 and have since returned to Europe multiple times under four head coaches, also taking in Italy, Ireland, Switzerland and France. On the agenda for John Carroll in 2020 are the Naples and Sorrento coast, the buried city of Pompeii, Mount Vesuvius, ancient Rome and The Vatican, before a game against a local Italian club team.