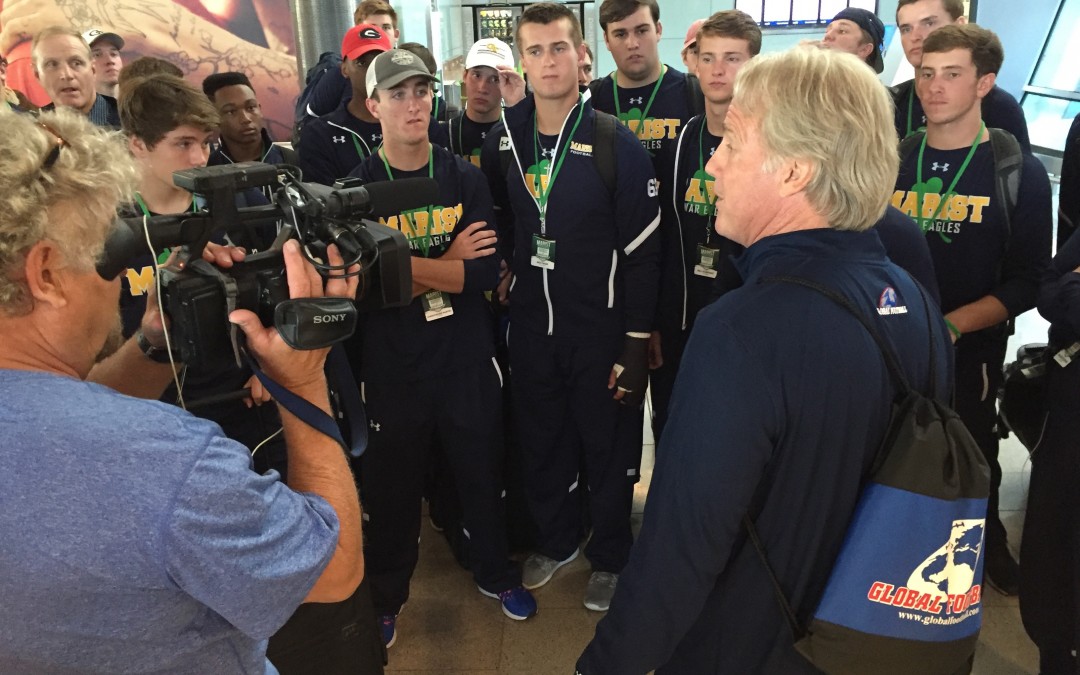 The six top American football high school teams who will play a regular season match at Donnybrook Stadium on Friday 2nd September have touched down in Ireland and are ready to parade through Dublin city centre to celebrate their arrival.

The schools’ players, coaches, bands and cheerleaders will march through the heart of Dublin on Thursday at 4.30pm, led by the Boston College and Georgia Tech bands and cheer teams. Starting at Parnell Square, the festivities will carry on down O’Connell Street over the O’Connell Bridge, along D’Ollier Street and to the front of Trinity College. A High School Pep Rally will then be held at Parliament Square in Trinity College.

“I’m really looking forward to the parade and seeing all the tourist attractions and having fun here with my teammates,” said St Peter’s Prep running back Adonis McGee, as he arrived at Dublin airport on Wednesday morning from New Jersey. “We all got some sleep and it was a smooth flight. We’re excited and this is a great opportunity to be out the country and playing football. We have to combine two things, focusing on what we have to do for the game and have fun being in a different country at the same time.”

The six schools visited local tourist attractions including Croke Park, Malahide Castle and the site of the Battle of the Boyne before shaking off the jet lag from an overnight journey across a five-hour time zone on the practice field.

“Now we’ve got to redirect and handle the flight and travel, but we’re here and we’re ready to get going,” said Marist School head coach Alan Chadwick. “Everything’s gone really smooth and we’re really looking forward to exploring Irish culture. In some respects it is a distraction to do this in the middle of the football season, but now that it’s here, everybody’s excited about it and are raring to go.”

Reigning Georgia Class AAA State Champions the Westminster School will be led this week by assistant coach Marty Wild, who will assume the head coaching responsibilities in place of Gerry Romberg, who remained stateside due to family reasons. The sheer size of the Wildcats players literally stopped traffic as they exited the tour bus to take a look at Donnybrook Stadium, where they will play on Friday at 11am.

“I was a head coach for 18 years before this and this is my tenth year at Westminster, so I’ve known Gerry a long time and I’m here to do exactly what he would do,” explained Wild of his unexpected role. “Nothing will change and we’ll do things the usual way.”

The Wildcats showed no signs of fatigue as they added an impromptu visit to the beach having arrived ahead of schedule, and sang and cheered their way into the venue for Friday’s games.

“The enthusiasm has been outstanding, they’re really having a great time and they’re really focused on taking in and understanding all the things we’re seeing,” said Coach Wild. “I thought that after not sleeping for 24 hours they might be a little dull, but they’ve really adapted to the environment and I’m really happy with the way they’ve reacted to the ride across the Atlantic.”

Donnybrook Stadium will play host to the triple-header of high school American Football games, which kick off at 11am, 2pm and 5pm on Friday, with all proceeds being donated to Special Olympics Ireland. The three games will mark the opening of the Aer Lingus College Football Classic, taking place at the Aviva Stadium the following day, Saturday 3rd September.

Admission to Donnybrook Stadium is free of charge for children under 16, while adults may make a voluntary donation of €10 for their entry, with all proceeds being donated to Special Olympics Ireland.