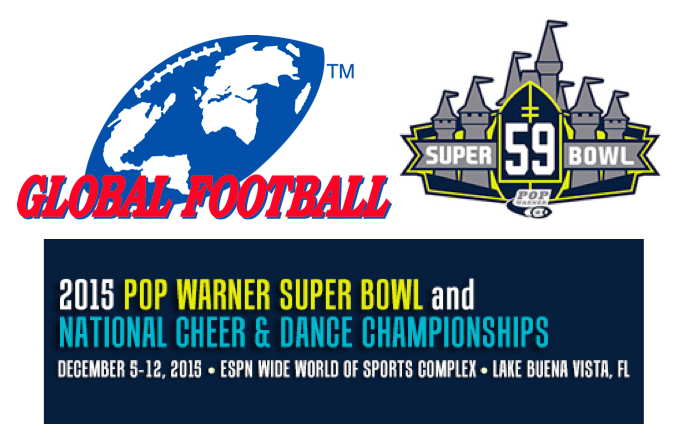 The international bracket, organized by Global Football, will feature eight teams from Canada, Mexico and the United Arab Emirates in the Midget and Junior Midget Divisions.

“Ever since Pop Warner Executive Director Jon Butler and I discussed adding an international competition to the fabulous Super Bowl event, it has been a pleasure to host quality youth teams from around the world in Orlando, and to work with Pop Warner,” said Patrick Steenberge of Global Football. “We continue to expand the number of competitors and visitors who come to compete and enjoy, and look to further build upon this in the future.”

The teams will see game action on Monday, Thursday and Saturday, December 7, 10 and 12, while enjoying the excitement at the ESPN and Disney facilities have to offer in Orlando during their visit.

Due to the odd numbers of teams in each age division, First and Second Round games played on Monday and Thursday will each be 24 minutes in length (two 12-minute halves) as each team plays two games per day.

In the Midget Division, the two teams with the best win-loss record, separated if necessary by a fewest points allowed tiebreaker, will advance to Saturday’s Championship Round, played as traditional games of four 10-minute quarters of play. The remaining three teams will compete in a separate a round-robin tournament on Saturday.

The three Junior Midget Division teams will enter a Championship round-robin tournament, featuring the same game format as in the earlier rounds, playing two 12-minute halves, with the champions emerging as the team with the best win-loss record, also separated by the fewest points conceded tiebreaker.