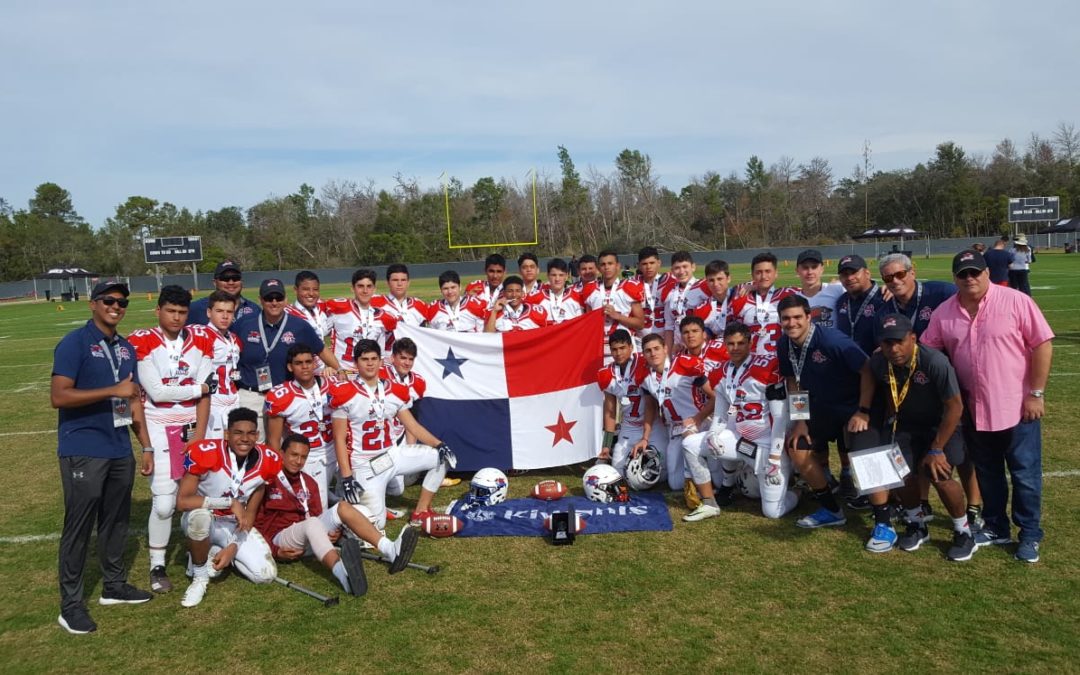 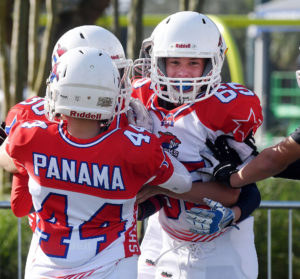 The Panama Sharks finished with a 2-0 record at the Varsity level as they won their final game 18-0 against Queretaro Mexico, having opened with a 20-0 win over Mexico Oriente. Queretaro finished with a 1-1 record having won the battle with fellow Mexicans Oriente 33-6.

In the Junior Varsity Division, the Sharks twice beat Finland by 43 points, while Oriente became the first international team to take on American opposition and put up a brave fight, eventually losing 32-6 to a more experienced Harmony Longhorns team from Florida.

Panama’s success in the Varsity division came despite losing starting quarterback Juan Raul Pastor to injury as he threw the team’s first touchdown in their first game. Back up Gabriel Archer stepped in to the spread offense and the coaching staff made adjustments, while the defense impressed and did not concede a point in either game.

“We met our expectations,” said coach Eric Holland, whose Panama team is made up of players from multiple school programs. “Teams were tough and a little bigger than us, but they were a little shorthanded and playing iron man. We wore them out especially at the end of the game. In the final game, Queretaro had a dangerous no huddle offense so we tried to control the clock.

“Coming here to the Pop Warner Super Bowl is great for us. It creates unity between the different school programs and brings the kids together. It is a good end of year award for the staff that won the Panamanian championship, whose head coach gets to then be the head coach of the Pop Warner team.

“It is something very positive for a Central American country to highlight success in sports to take the focus away from some of the negative day to day stories that are in the news.”

Mexico Queretaro coach Marco Gutierrez added: “This a fantastic opportunity for us to come here and compete at this level. It is one of the best things that has happened to us. The team is getting better every year and this is our second final in a row. We only brought 14 players with us this year and still did well, so next time we need to bring 22 to be more competitive.

“The whole Pop Warner experience is great and just to come here to Orlando and play against other nations, and see the American teams in the Super Bowl is great. This is the home of football, the country where the game comes from.”

Finland won the International Bowl championship last year and returned for a third time with a young squad that will develop as a result of being immersed in the sport for a week.

“Most of the guys have played American football for only one or two years, so this is something new that they don’t have in Finland,” explained head coach Henri Kurki. “We have less than four-thousand people playing football, so this is good to help growth and getting people playing. We bring people from Finland to the Florida sun, play some football and go back and get as much out of it in as we can through social media.

“Everything has been perfect here. This is our third time back here, so we know what to expect and its easier for the kids to come in prepared. If we are able to, we will bring these kids back at the varsity level, so hope to have enough kids for two teams next year.”

Global Football founder and president Patrick Steenberge added: “This was a memorable week in many ways, and I commend all the organizers, coaches and parents who worked so diligently to provide this opportunity for their youngsters. Pop Warner and Disney provide the ideal venue and logistics, which makes our job pretty simple. While there are many so called ‘youth championships’, none can provide the blend of competition, intercultural exchange and flat out fun that this Pop Warner Super Bowl does. Looking ahead to our tenth year in December 2019, I anticipate further expanding the countries represented in Orlando, with each international team offered the chance to play a U.S. team if they so choose.”

The international youngsters were among the more than 16,000 American football and dance and cheer enthusiasts who converged on the ESPN Wide World of Sports™ Complex for a week of celebrating playing football. While in Florida, they visited the four Disney Parks, attended the Championship Week Celebration Party and International Super Bowl Event and took part in a Speed and Conditioning Clinic held exclusively for international teams.