Ravens and Blue Streaks Win in Austria and Barcelona 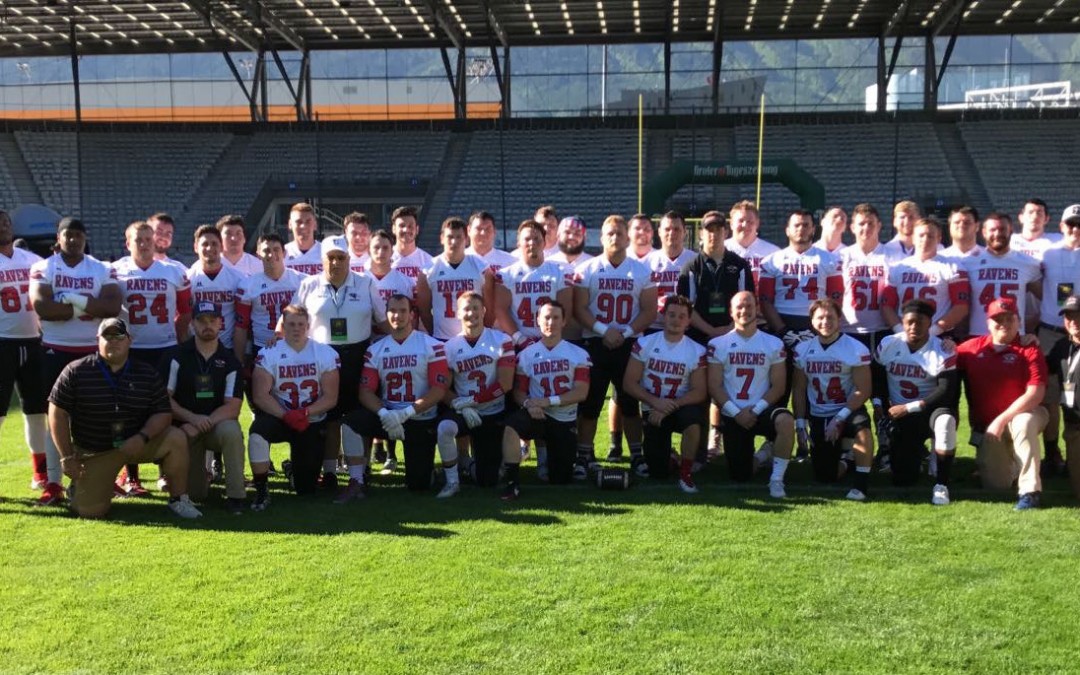 The games were part of a series of showcases that highlight week to 10-day overseas visits that include cultural and historical sightseeing, spring practices and clinics to help further develop the game in Europe and Asia.

Benedictine College to Austria from May 22-30. Opponent: Swarco Raiders

After a scoreless first quarter, the Ravens trailed 7-0 after Raiders quarterback Sean Shelton ran 4 yards for a touchdown and Thomas Pichlmann tagged on the extra point before increasing the hosts’ lead to 10-0 with a 28-yard field goal. Benedictine College replied as Charles Nihart found the end zone from a yard out and a Sam Vitulli PAT reduced the deficit to three points. Pichlmann split the uprights again, this time from 27 yards out, to put the Raiders 13-7 ahead at halftime.

SWARCO looked to be heading towards victory when Shelton hit Platzgummer for a 15-yard touchdown and the reliable Pichlmann tagged on the extra point and the Austrians led 20-7 in the third quarter. Another Nihart rush, this time from 15 yards out and a Vitulli conversion pulled the Ravens back into contention then Nihart’s third rushing score of the day tied the game at 20-20.

Logan Harris put the visitors ahead for the first time with a 15-yard reception from Shaefer Schuetz, who then connected with Zach Renfro for a two-point conversion and a 28-20 lead. The Raiders pulled to within a point as Tobias Bonatti scored on the ground from two yards out and Pichlmann was true with the PAT. The decisive score came in favor of the visiting Ravens as kicker Vitulli nailed a dramatic 38-yard field goal with only seconds remaining for the narrow win.

John Carroll University to Spain from May 22-30. Opponent: Catalan All-Stars

John Carroll University went into Saturday’s exhibition game expecting to win against a Catalan All-Star team eager to test themselves against high-quality visiting opposition, with the score being less important than the teaching and learning aspect of the scrimmages.

The Blue Streaks led 21-0 after the first quarter with Evan Nugent returning the opening kickoff 75 yards, Arin Pruitt scoring on a 3-yard run, and Brian Kornowski catching a 10-yard pass from Anthony Moeglin. All 3 PATs by Matt Danko were good.

JCU led 42-7 at halftime as touchdown passes of 42-yards to Kornowski and 25-yards to Danny Disbrow by Nick Velar, along with a Josh DeLozier 12-yard run and three more Danko PATs set the Blue Streaks well out in front.

A Jimenez interception return to pay dirt over 42 yards, a Joey Bates 24-yard run and two more Denko PATs earned a 56-7 lead by the end of the third quarter. The 91-7 final score was completed by a Brandon DiMarco 25-yard pass to DeLozier, Stan Elad’s 2-yard run, Delozier recovering a lateral pass in the end zone and reeling off 15-yard run, a Velar 80-yard run and the reliable Denko tagging on his PATs.