Ready For Kickoff In Dublin 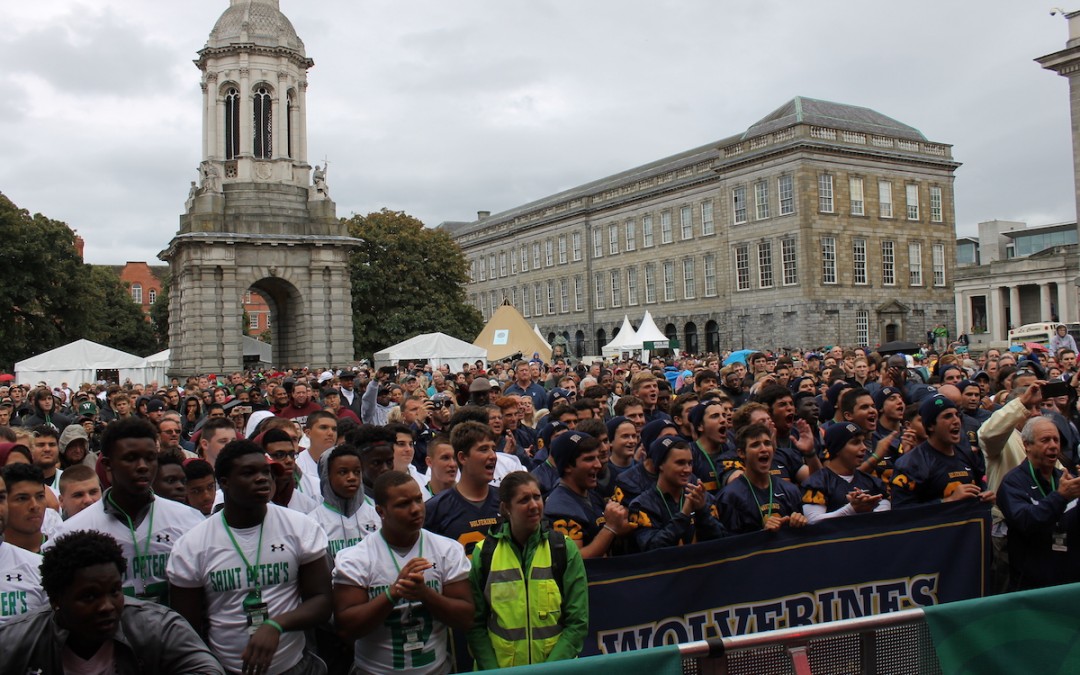 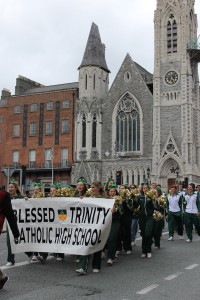 Donnybook Stadium in Dublin will host a spectacular triple-header of three American football high school games on Friday, with the action kicking off at 11am, followed by games at 2pm and 5pm.

The players, coaches and cheerleaders of the six visiting teams closed out their final day on the practice field before they do battle on the gridiron by parading through Dublin City Centre where they were welcomed by thousands of waving and cheering spectators. Led by the marching bands of Georgia Tech and Boston College, the parade wound its way from a busy O’Connell Street to Parliament Square at Trinity College Dublin, where a raucous pep rally officially opened the weekend of Aer Lingus College Football Classic events in Ireland’s capital city.

Admission to Donnybrook Stadium for the American Football Showcase games is free of charge for children under 16, while adults may make a voluntary donation of €10 for their entry, with all proceeds being donated to Special Olympics Ireland.

The three are available online to sports fans worldwide for a subscription of $9.95 at: 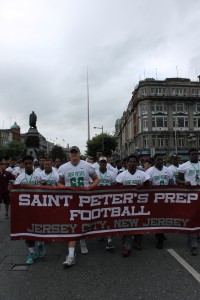 The coin toss for Friday’s first game at 11am (6am US ET) between reigning Georgia Class AAA State champion Westminster School and Community School Naples will be performed by decorated Special Olympian Loretta Claiborne. The half marathon gold medalist from the 1991 and 1999 Games also spoke at Thursday night’s Pep Rally.

The head coaches of the visiting high school teams believe their players have now adjusted to the five-hour time difference between the U.S. east coast and Ireland and are raring to pull on the pads and helmets having practiced twice on Irish rugby and Gaeilic Football pitches.

Westminster School coach Marty Wild: “Today was even more positive at practice. The players have slept for 12 hours and they came in really focused. They fully understand that while they’re having a good time, they also have to be at their best on game day.” 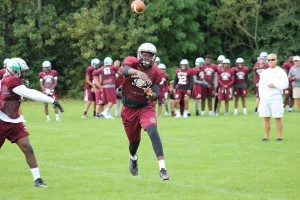 St Peter’s Prep head coach Rich Hansen: “It’s business as usual for us. I was very surprised yesterday. We were up for basically two days, apart from a little sleep on the plane, and the kids were very receptive and worked very hard and had plenty of energy. Today was a light workout, but overall the practices have been a bright spot in terms of us being focused.”

Belen Jesuit head coach Richard Stuart: “The whole experience has been amazing. With the sightseeing and going to the Cliffs of Moher, the kids are just overwhelmed, but in a good way. It is so different to what they’re used to seeing. Everything has been on schedule and now we’re adjusted to the time difference and are dialed in on the game. Yesterday we had a great two-hour practice in pads, which we were pleased with.” 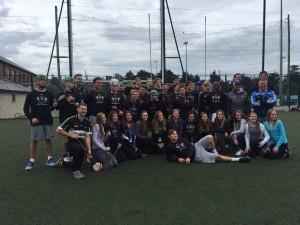 Community School Naples head coach Paul Selvidio: “They look good today. Towards the end yesterday you could tell they were losing steam with all the travel and jet lag. They got a good nine hours sleep and are really back on schedule. We look like we’re ready.”

Among the opportunities to explore Ireland, the Community School Naples travelers tried their hand at the nation’s two most popular sports: hurling and Gaelic football. The group tested out equipment and learned the basics of the game.

“It was fantastic,” added coach Selvidio. “You can really tell there is so much pride in the Irish people with those two really ancient sports. Our kids really loved it. They didn’t know what to expect from it, but it was a five-star presentation and they really got to immerse themselves in that and learn about the Irish culture and learn about the encompassing pride that they have with those two sports.”