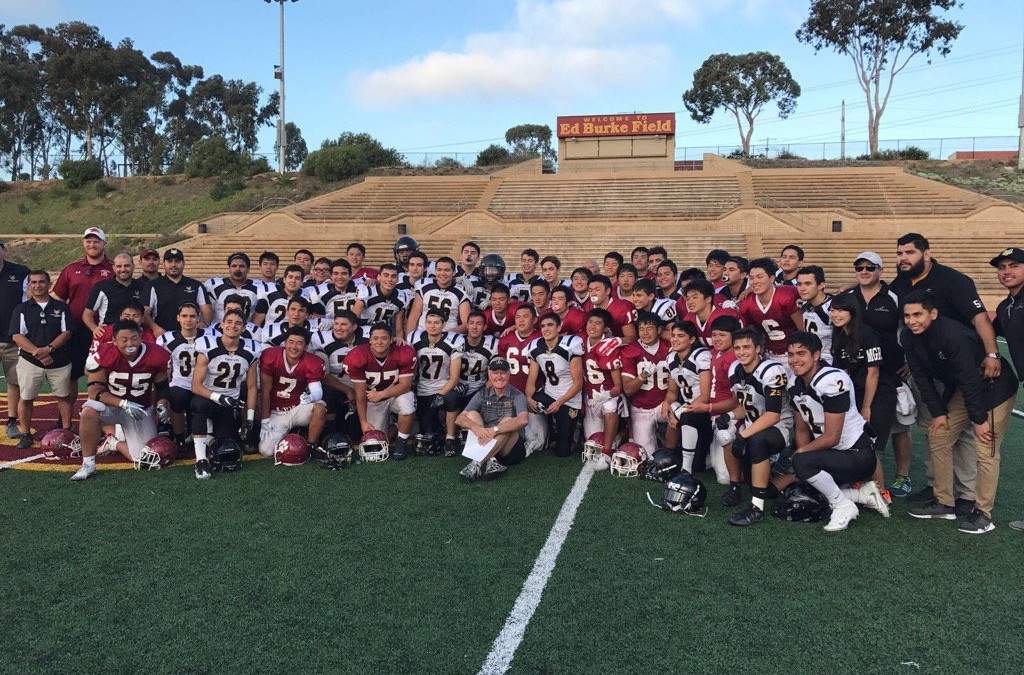 A group of Japanese student-athletes from Ritsumeikan Uji High School in Kyoto, spent two weeks at Torrey Pines High School in San Diego in August, as part of a unique exchange visit.

The youngsters attended classes at Torrey Pines, which played host to a visiting Japanese group for an eighth year, to help improve their English language skills and spent time on the practice field to increase their knowledge of the sport they call American football.

The Panthers played a scrimmage against CETYS Universidad, who traveled across the border from Mexico for the international match up. The Japanese youngsters won by five touchdowns to one, which included four offensive scores and a pick-six.  They remain undefeated in America with an impressive 8-0 record.

“It is always amazing how they pick up the Wing-T in such a short period of time, and do so well running it,” said legendary former Torrey Pines head coach Ed Burke, who helped coach the Ritsumeikan Uji team.  “They actually fumbled on the six-inch line on the last play, so there would have been another score.

“As goofy as they were at times in class and on the practice field, when it came to game time they were ready, and played with energy and passion.  I think they were pretty proud of themselves, and as a result, probably really enjoyed their visit to Disneyland afterwards.”

While in Southern California, the group attended a Los Angeles Rams preseason game, watched San Diego State University and UCLA football practices, toured Hollywood and visited Disneyland. The initiative also provides an exciting experience for local families, who served as hosts for the Japanese visitors, welcoming them into their homes and helping them explore the area during their stay.

The visit marked the ninth time the progressive Japanese high school has partnered with Texas-based organizer Global Football to bring its students to the United States, and returned to San Diego for the first time since 2014. Former Falcons head coach Ed Burke has played a leading role in the initiative since its inception, and his relationship with Global Football dates back to 1998 when Torrey Pines hosted Mexican players taking part in the NFL Global Junior Championship Super Bowl event.