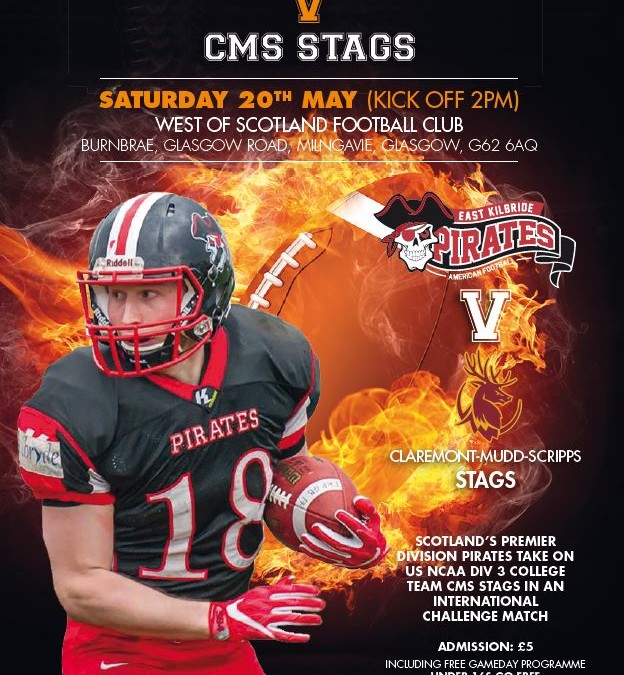 Claremont-Mudd-Scripps football roster will travel to Ireland and Scotland on Monday, May 15, for a nine-day cultural and educational tour that will include a game against top UK club team the East Kilbride Pirates.

The Stags will travel for a third time with Global Football, the Texas-based organization that kicks off a 22nd year of taking American football teams overseas on the sporting and cultural adventures of a lifetime when a total of seven NCAA D-III colleges head to Europe and Asia this spring.

“We are looking forward to our trip to Ireland and Scotland and experiencing the rich cultural history in both places,” said Stags head coach Kyle Sweeney.  “The opportunity to travel as a team and explore a part of the word with so much history will be a once in a lifetime experience.  Each time we talk about it with our team, the excitement level gets higher and everyone has something different that they are looking most forward to.

“The East Kilbride Pirates have a rich tradition of playing American football and have impressed us with their skill and dedication to the game.  We are looking forward to meeting their players and coaches.  It should be a great game.”

The Pirates welcome a visiting NCAA D-III team to East Kilbride for the third year in a row, having worked with Global Football to host North Central College (IL) in 2016 and Hanover College (IN) in 2015. The Pirates are one of the premier teams in the United Kingdom and have won their latest two games of the season against the Sheffield Giants and local rival the Edinburgh Wolves.

“This game is one of the highlights of our season,” said Pirates coach Ross Templeton. “The chance to test ourselves against a team from the U.S. is a great challenge, and allows our team gain a lot of experience and take a step forward in our play. I expect this to be a big challenge for our team, as it forces us to try and raise our game – which can really help us for the rest of our season.”

The game will kick off on Saturday, May 20 at 2pm local time / 6am PST at the West of Scotland Football Club in Milngavie.

While in Ireland, the Stags will visit the spectacular Cliffs of Moher, Galway, the capital city Dublin, Croke Park and the Gaelic Athletic Association Museum, and the Guinness Storehouse. They will take the Superfast Ferry from Belfast in Northern Ireland to Scotland and will visit both Glasgow and Edinburgh, seeing the William Wallace Monument, Stirling Castle and Edinburgh Castle.

“Most of these schools and coaches have traveled with us multiple times before and we are proud that they choose to work consistently with Global Football to provide a wonderful opportunity for their student-athletes to experience the world and play the sport they love overseas,” said Global Football Founder and President Patrick Steenberge.

Under head coach Kyle Sweeney, the Stags finished their second consecutive season at 7-2 overall in 2016 and placed second in the Southern California Intercollegiate Athletic Conference at 5-2. The team had its first 4-0 start since 2010. The CMS defense led the conference for the second year in a row in yards allowed per game at 322.9 at just 97.4 rushing yards per game. CMS also topped the conference with 211 yards from punt returns.