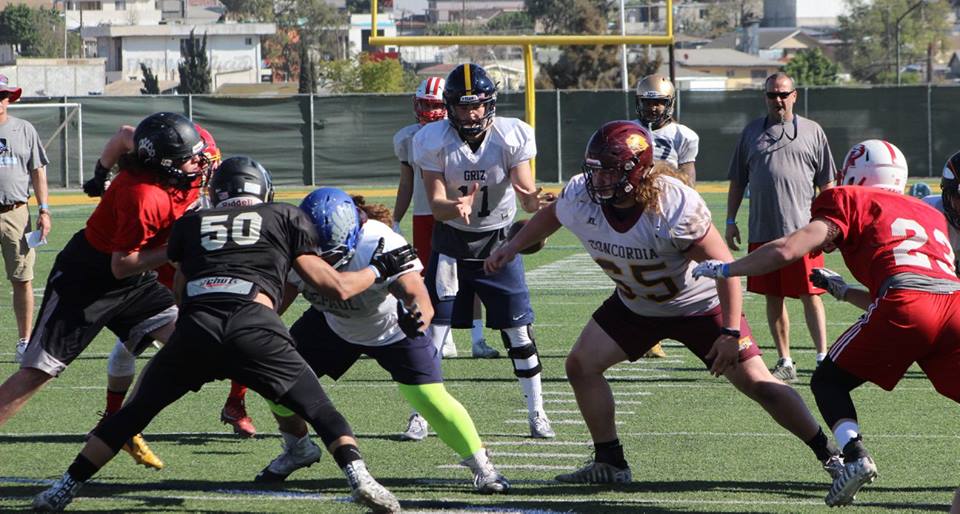 A squad of 40 standout student-athletes from NCAA Division III schools will take on the CONADEIP All-Stars from Mexico’s private universities on Saturday, December 16 in the 20th annual Tazón De Estrellas (Bowl of the Stars).

The game will be shown live via a webcast at www.MaximoAvance.com and live stats will run throughout the game at http://livestats.onu.edu/livestats/fb/xlive.htm.

Don De Waard – Central College (retired) – Head Coach:
“The enthusiasm level has been great and I think we have a really great group of guys. We have to get a lot done in a short period of time.”
Video interview: https://www.facebook.com/GlobalFootballLtd/videos/1556925494342493/

Rob Cushman – Occidental College – Defensive Backs:
“We have eight guys that are good athletes with good instincts. They are very coachable and are committed to doing things the right way. There is good competition going on even thought all of our guys will play a great deal on Saturday. We think the Mexicans will attack us vertically and horizontally, so we are preparing for a battle. I like this group and am excited to see them play.”

Josh Meeks – Hamilton College – Wide Receivers:
“We have a good, solid group. Our tight end can split out and run so that adds to our flexibility. We are athletic. I think we will be able to do a lot of different things – routes across the middle, catch and run stuff.”

Jim Lyall – Siena Heights University (retired) – Defensive Line:
“Our defensive linemen are an athletic, hardworking and focused group. They are excited to be here. With only five guys, we will run mostly a 3-4 defense.”

The Tazón de Estrellas series is currently tied at four wins each as Mexico’s CONADEIP All-Stars won the eighth edition in 2016 with a convincing 51-26 victory over a Team Stars & Stripes select squad drawn from 22 NCAA Division III schools across the United States at Zorros Stadium at CETYS University in Mexicali.

In 2015, Team Stars & Stripes recovered from a 14-point deficit at the scene of this Saturday’s game to produce a stunning a fourth quarter comeback and claim a 15-14 win. With his team trailing by seven points and three yards from the end zone, quarterback Brady Huber was flushed from the pocket, but retained his composure to find George Vidas for a touchdown, meaning the Americans trailed by a point. Head coach Don De Waard decided to go for it all rather than kick the tying point and a perfectly executed two-point conversion pass from Matt McDaniels to Huber capped a thrilling victory.

The Tazón de Estrellas was established after the Aztec Bowl came to an end in 2007. Former AFCA President, Coach Ron Schipper, who led Central College for 35 years from 1961 to 1996, helped conceive the idea of the Aztec Bowl, as an event that would provide NCAA Division III senior football players with a true post-season opportunity.

Read the full history of the games here: http://www.globalfootball.com/tazon-de-estrellas/history/