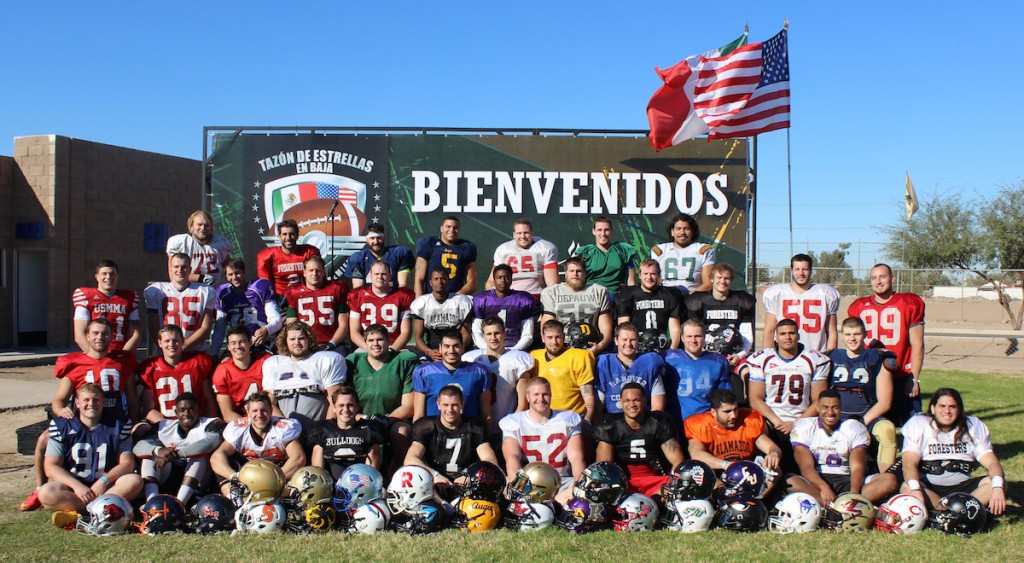 Here’s what some of the players and coaches from Team Stars & Stripes are saying about their week of practices and activities in Mexico and the challenge of preparing a roster for a game with only a week in which to formulate a game plan. 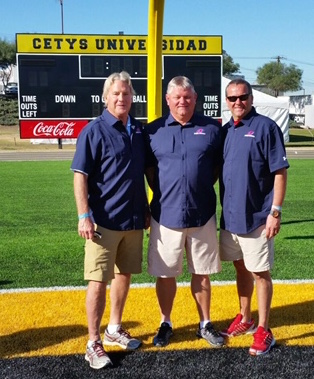 Head Coach Don DeWaard, Central College
“I’m excited to play football on Saturday. I think we have a pretty good football team. They’ve handled the week very, very well. They’ve been enthusiastic, smart and have learned quickly. We have come together as a team and are ready to go.”

Octavius Sanders, WR, who usually plays at DB for Kalamazoo College
“I’m adjusting to playing wide receiver, but I think I’m getting it done. I’m an athlete, so I’m confident that I can play. It’s been a great experience so far. The players and coaches have been great.”

E.J. Edinburgh, Cal Lutheran University, LB/RB, who played LB this year and before that, RB his first three years at CLU.
“It’s been an amazing experience. I’m very blessed to be a part of a wonderful event. I used a GoFundMe account to raise money to make the trip, so I can’t wait to show my sponsors what I can do on the field. It’s been fun playing both ways. I love LB, but I really enjoy running the ball too.”

George Vidas, WR, Lake Forest College
“It’s been great to meet all of the new people. I’m down here with a high school friend of mine (Javier Rivera of Eureka), so that’s been cool. It’s great to be back playing football.”

Brandon Stiers, DE, Augustana College
“I got lucky because I’m familiar with the scheme we are using on the defensive line. Picking up the D was easy for me. It’s been really fun. It’s the top players from each of the schools represented here, so you know the other guys have your back if the ball gets past you.”

Taylor Shellman, OC, DePauw University
“I ran the offensive line at DePauw and it’s similar here. I’m learning my teammates, getting all of us on the same page. We have a very good D-Line to practice against here, so that’s been fun.”

Andrew Bryan, LB, John Carroll University
“It’s been an awesome experience so far. Our defensive calls have been pretty simple and I think we have all picked it up quickly. The terminology is different, but as long as we communicate it will be fine.”

Offensive coordinator Joe Austin, Southwestern University
“We’ve gotten better every day, which is the goal. We teach assignments and our guys got that down. We won’t know how each player will react in game situations until we kick it off on Saturday, so we will have to adjust on the fly. I feel very good about where we are right now.”

Offensive line coach Rob Cushman, Minnesota-Morris
“I am pleasantly surprised with their athleticism and their knowledge. They are going to be a good group. They have all come from good programs and have been well coached. They picked up our system quickly and were aggressive with it. I am excited with this group.”

Defensive coordinator Ron Planz, Elmhurst College
“With only six D-Linemen and an abundance of linebackers, we chose to go with a 3-4 defense. That way we can have a conventional two-deep and play to the strengths of our players. They have picked up our schemes quickly and we are excited about the defensive unit. We want to slate and angle up front and bring linebackers to cause confusion with the blocking schemes for the Mexican offense.”

Secondary coach Tripp Merritt, Susquehanna University
“In just two days we have progressed tremendously. I’ve really been impressed at how quickly the guys have picked it up. We have a lot of coverages installed already. The guys are having fun and playing hard and fast.”