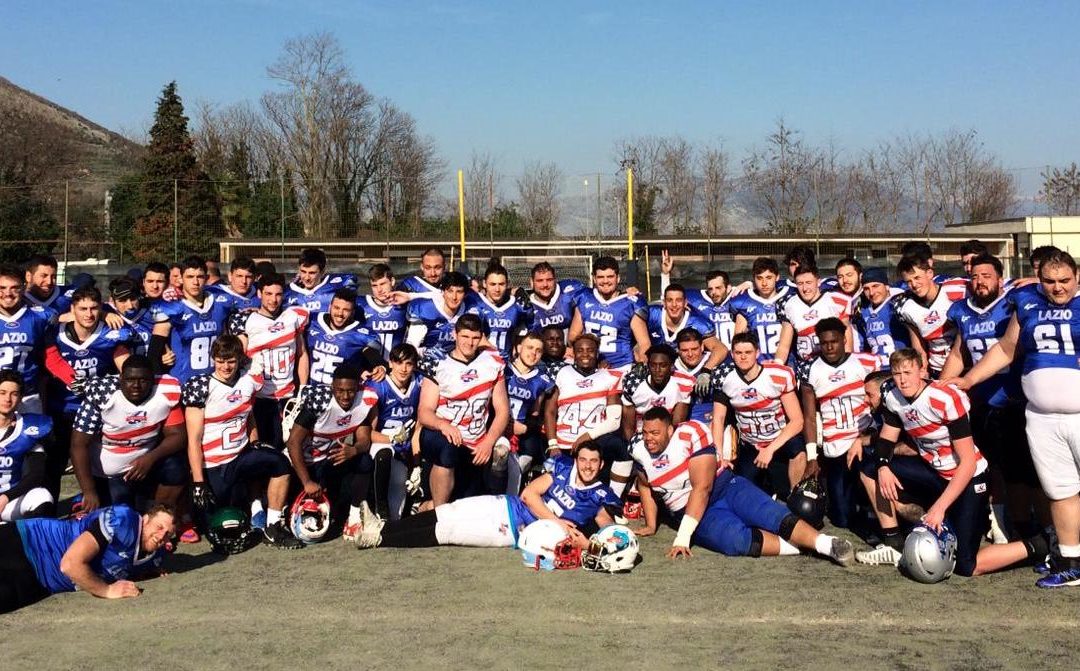 Head coach Bill Gallagher’s squad took an early lead with a 75-yard touchdown pass from Elliott to Washington and Carter ran into the end zone on the two-point try for an 8-0 lead.

The Italian team, drawn from local clubs Marines Lazio, Roma Grizzlies, Gladiatori Roma, Minatori Cave, Bufali Latina and Legio XIII Ostia, and coached by Bart Iaccarino and his Lazio Ducks staff, saw their reply turned into eight more points for the Americans.  Gyabaah returned an interception for a touchdown the two-point conversion opened up a 16-0 lead.

The visitors raced to a 32-point margin by the end of the first quarter as Mitchell Nagy hit Dean from 15 yards out for another score and Dean then returned a second Team Stars & Stripes interception for a pick six.

Elliott and Dean connected for another passing touchdown, Carl Chaney found pay dirt from five yards out and Carter ran in a 15-yard score on the ground to end a dominant first half with a 55-0 advantage.

Washington got in on the defensive action to add to his first half receiving touchdown with an interception to the end zone then the FIDAF Regional All-Stars enjoyed some defensive success as the Italians stopped Team Stars & Stripes on 4th-and-goal.

Carter had the final say as he ran in a hand-off from Gyabaah for a 25-yard touchdown to complete the third quarter and the scoring.

Team Stars & Stripes included a freshman high school player for the first time in the 11-year history of the Global Ambassadors Bowl as Grayson Mast, who trains with coach Evan Sharpley, took part in the game.