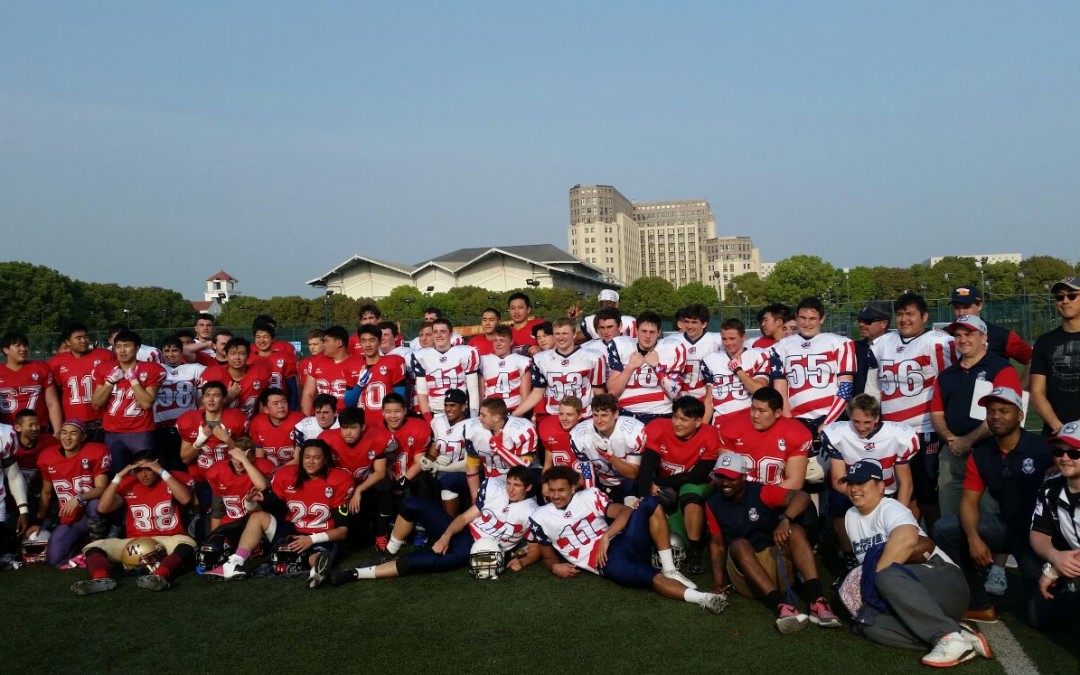 The game between the select squad of student-athletes drawn from multiple schools and states across America and their Chinese hosts highlighted a nine-day visit to China. The visiting players and coaches held a youth clinic before the game, which was played to a crowd of about 800 spectators on a warm and sunny Saturday afternoon in Shanghai.

The annual Global Ambassadors Bowl provides the opportunity of a lifetime for deserving student-athletes to travel internationally, while playing the sport of American football and representing their school, state, nation and themselves. The squad of high school senior standouts is selected as much for a player’s conduct off the field as for his performances on the gridiron and is known as Team Stars & Stripes.

Evan Pearlman (Milken School, CA) returned an interception for a touchdown to open the scoring then quarterback Jaden Casey (El Camino HS, CA) hooked up with Tyrell Morford (Lincoln HS, WA) for a 47-yard scoring reception and added a two-point pass to Brandin Porter (Lincoln HS, WA) for a 14-0 lead. The Americans led 20-0 at the end of the first quarter after a seven-yard Divine Buckrham (Kriski Prep, PA) run.

Casey lined up under center to connect with Buckrham with a 56-yard scoring pass and then found Dan McGarry (Villa Angela St Joseph, OH) for the two-point conversion. Kyle Goldman (Milken School, CA) scored from six yards out and Buckrham added two points on the ground, before the Casey to Buckrham tandem, this time over 44 yards, brought up a 42-0 halftime score.

Kevin Daniel (Episcopal Academy, PA) found the end zone for an eight-yard score for the only points of the third quarter and two fourth quarter touchdowns rounded off the scoring. Daniel scored six more on the ground from 18 yards away and Perlman rushed for a touchdown.

“This game wasn’t about the final score, it was the opportunity to expose the host players here in China to a quality of play they have never seen before and to challenge their abilities,” said Team Stars & Stripes head coach Chris Adamson. “The clinic we held before the game was well received by youngsters who were very eager to learn and this is what this whole journey has been about: teaching young people, whether they are visiting from the United States and discovering a new culture, or are from China and are learning about our sport.”